Putting The Skinny On It 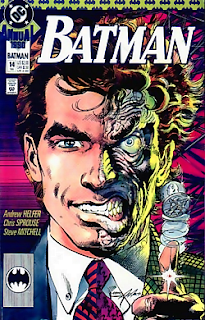 I recalled a week back when I was in the A&E ward, that a senior nurse said that I was very skinny in my face. She joked that I could use lipo-injections to fatten up my gaunt looking face.

The body of an endurance athlete is quite the antithesis of health. Due to a naturally lower bodyweight and body fat composition marathoners, triathletes and the like, look emaciated and almost unhealthy. My sunken left cheek contrasted with my swollen right cheek; my face looked asymmetrical in appearance. My half-and-half look was similar to the comic-book character of Two-Face in the Batman series.

Comparison is the ability to look for similarities when two things are placed side by side. Contrast is when you distinguish differences between two things. So how does a pre-race Ironman triathlete compare with a tall, skinny latte? Both are low in fat, and thin on the texture!

The seemingly unhealthy and shrunken look is a byproduct of longer hours of endurance type training. The endurance athlete consumes more calories, and uses up a substantial amount of energy during these extended training sessions. The energy equation is clear – output exceeds input equals weight loss.

I have kept my, sometimes, skeletal appearance; it is part of my body’s adaption to the 10 or more hours of exercise a week. It has remained my badge of honour, next to my almost unnatural wardrobe comprising post-race t-shirts. It could be worst – a ward robe with an open back. How’s that for a fashion statement, next to our fondness for anything spandex/Lycra?

Sometimes, the unhealthy and starved look is a picture of fitness, but a canvas of perceived unhealthiness. Skinny is as skinny does!