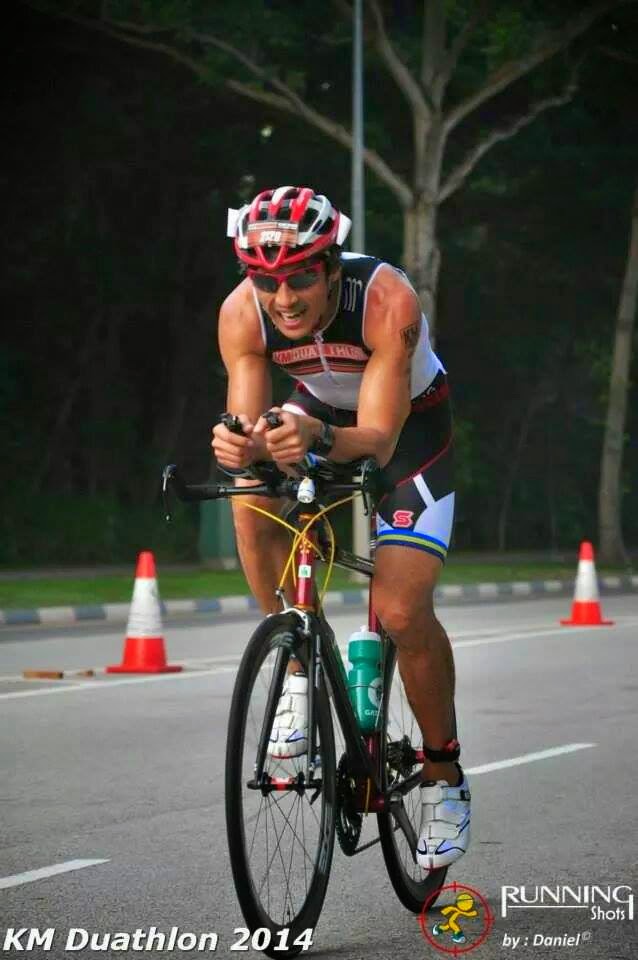 The KM Duathlon was held on 20 July, 7.00am, at the Changi Exhibition Centre. It attracted a few hundred endurance athletes to this boutique-race comprising a run-ride-run. We had not enjoyed a Duathlon for a few years, so this was a surprising treat. The format included a relay event, 5km-20km-5km (30km), or 10km-40km-10km formats. I elected to completed the 10-40-10 (60km) category, as a prelude to Ironman 70.3 Cebu (on 3 August). 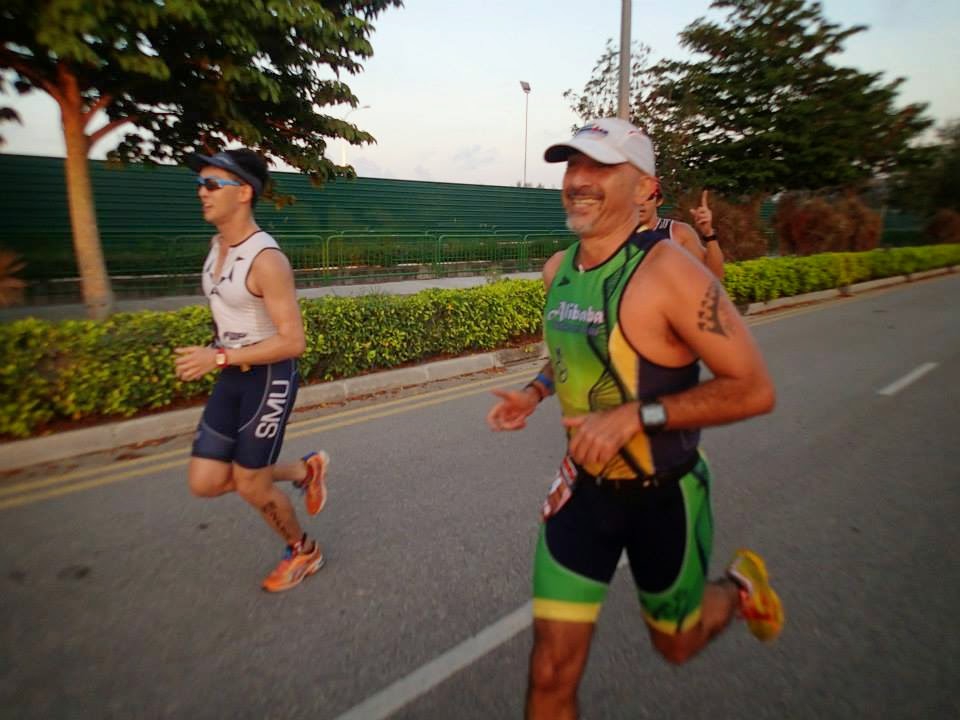 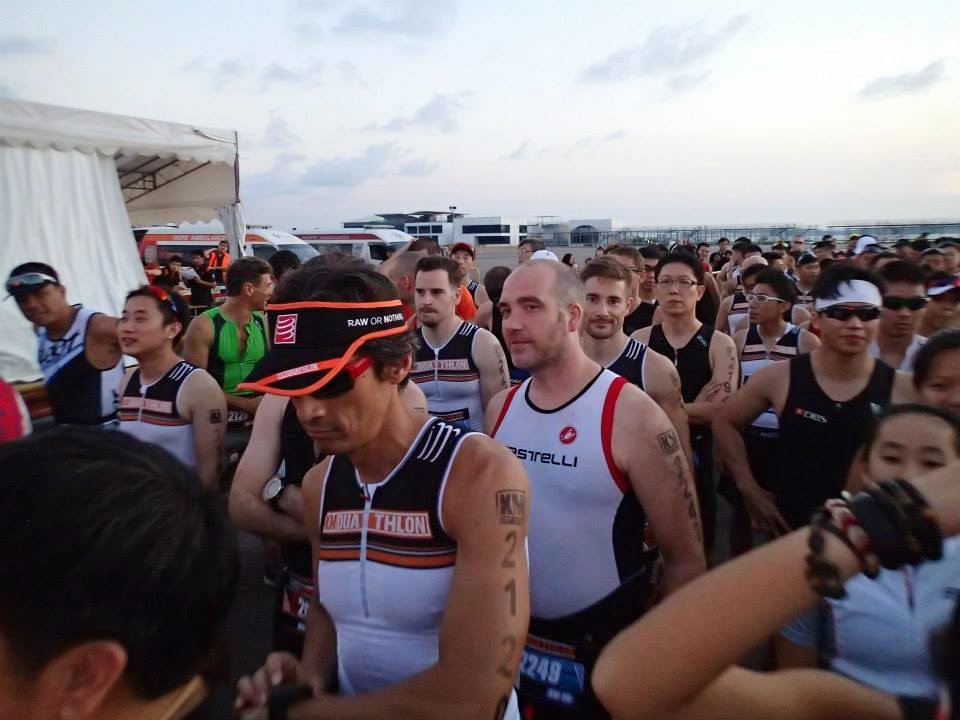 The calm before the storm...(I am wearing the official Compressport tri-top).
The 60km race was flagged off at 7.02am, and the 30km field of athletes followed up five minutes after. It was already daylight, so visibility was assured and the fast runners tore off hurriedly. The first 10km was dominated by the strong runners, as the fastest registered a 34-minute performance. I paced myself near the front, focused on my friend, Sante Scartozzi - a recent Ironman New Zealand finisher, and respectable age-grouper. With his strong run, I knew if I stuck close to him, I would be close to my race-goal of a sub-3 hour finish. My expected timing splits would have been around 48minutes, 1:15, and 52 minutes respectively, excluding transition. 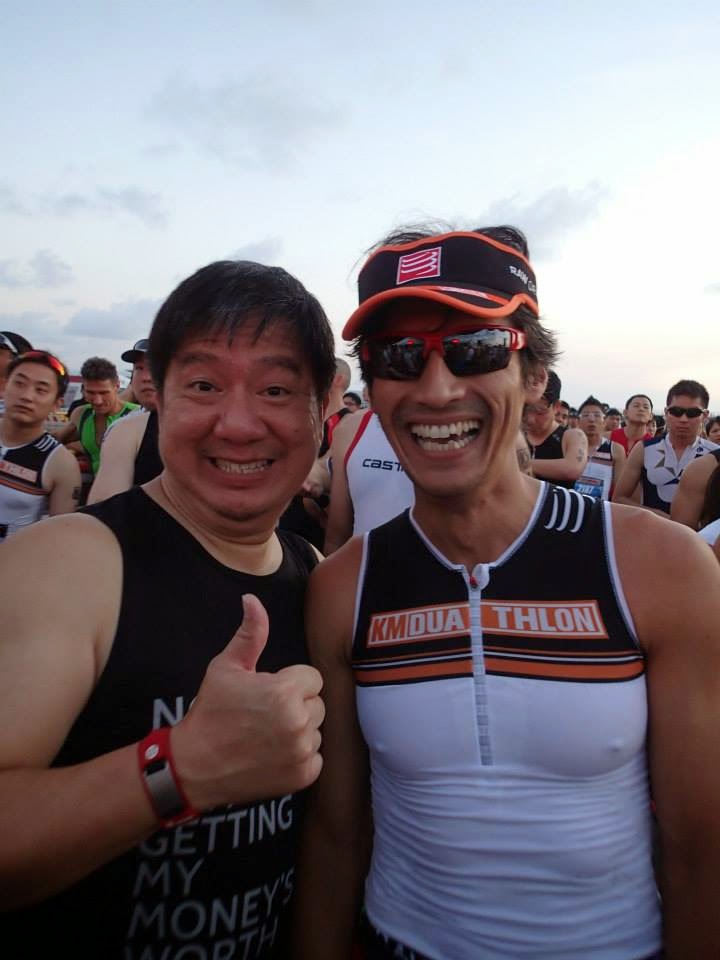 With the cheeky Peter Yap. 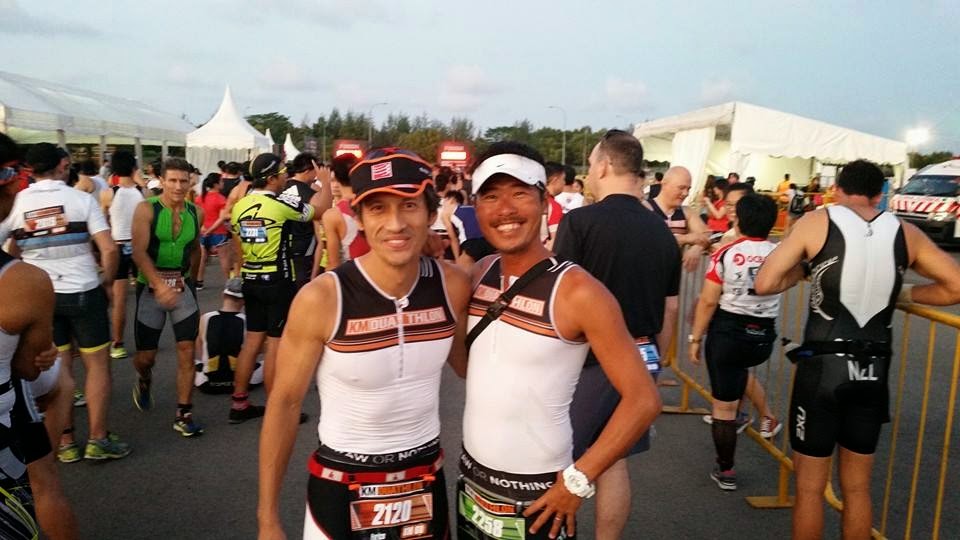 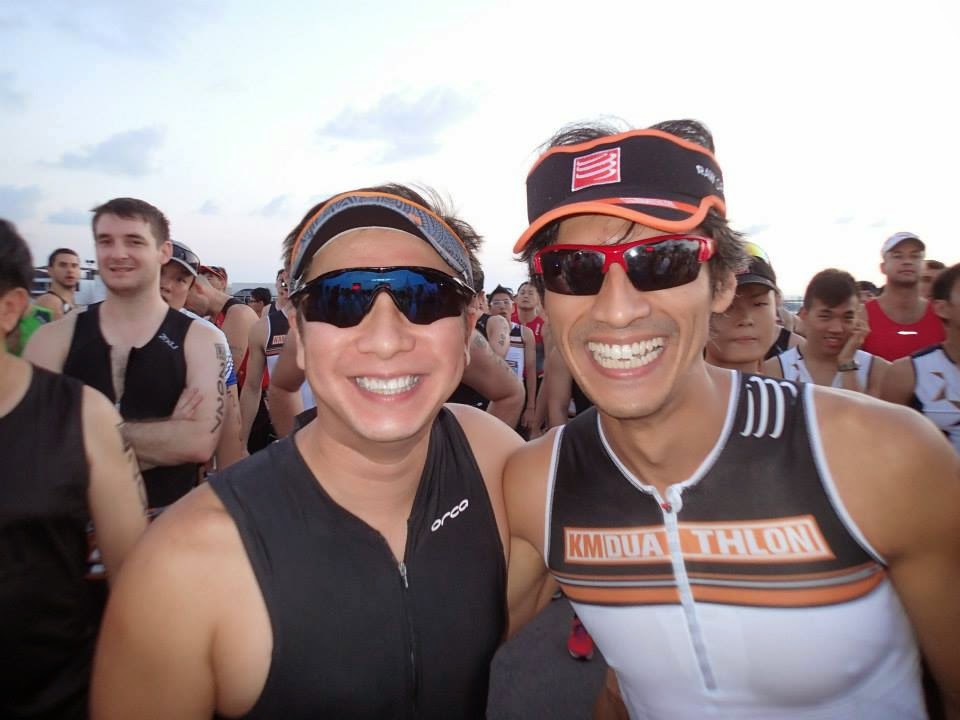 With Cebu-bound buddy, Winston Wong.
On the run: Too fast, you Wally! I followed Sante and the faster runners ahead of me, and braced for a pace that would be both comfortable and still not lose my ground. Coming into the Transition Area, I was mildly laboured however pleased that I almost did a PB in my 10km. Seriously, it was equal to my best time for a 10km, in both training or racing. I briefly basked in the moment of my achievement, and took 1:11 minutes for a quick-change. The only challenges for me were my new Shimano riding shoes/cleats, new fork (ENVE), new seat (ISM), and new bar-tape. As expected, my ride as stable and smooth and I could focus on the relevant factors. 'Focus on what you can manage' has always been my mantra. Note to self: Do more intervals for the run. Run like Sante. 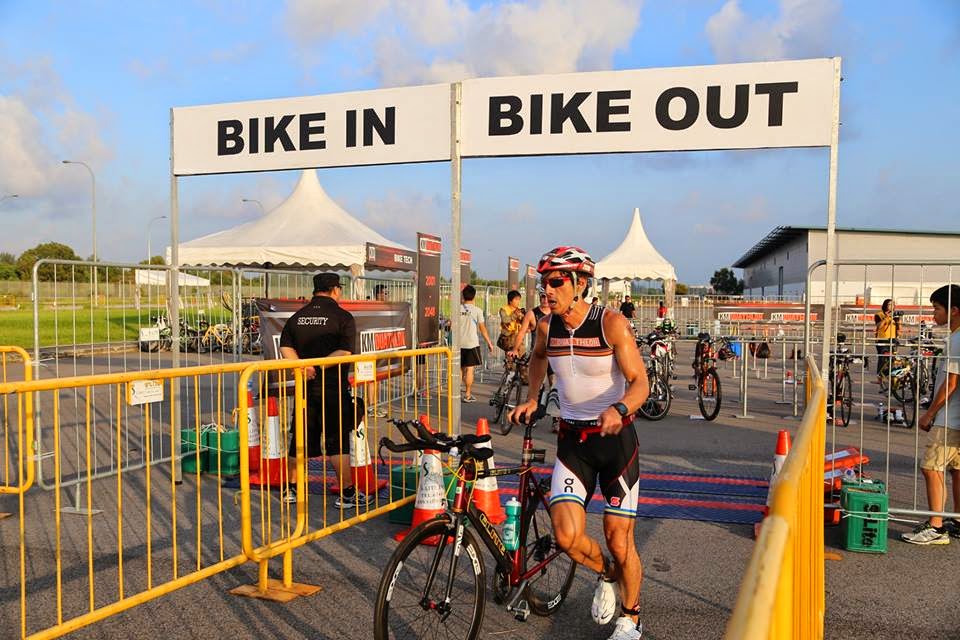 Out of Transition Area in a minute: Sloppily slow, though. 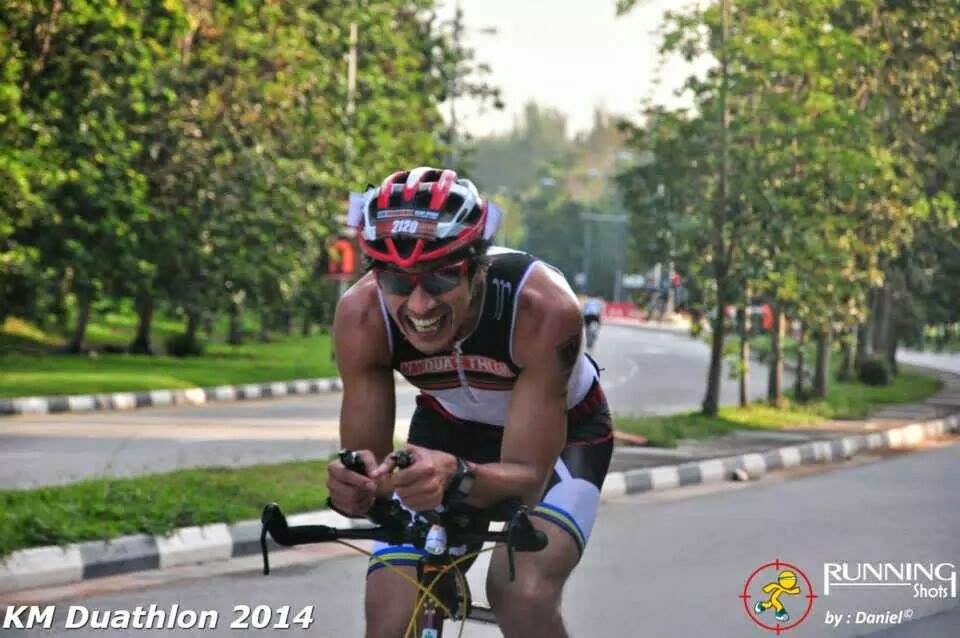 A new ISM Adamo Racing seat, sits well.
On the ride: I took the first lap easy as I needed to find my pacing and familiarise myself with the course. Once I locked that in, I was able to focus on my pace, cadence and breathing. I did not check my timing, and chose to go by my 'mental-ticks' of over-taking fellow participants on the flat course (that ran parallel to the airport runway). I was pleased with the way my bike performed, and I think I kept to my planned timing of 1:15 closely. I believe I lost some time when I spun in (more relaxed) into Transition. From experience, I wanted to run on less-depleted legs. Thus, I drank my bidon of Hammer Nutrition 'Perpeteum' which fueled me for both then ride and subsequent run. Another two bottles of water accompanied me, as you were expected to be self-sufficient on the ride leg (in this race). Nutrition is, invariably, the Fourth Discipline in triathlons and the vital link to success or disappointment in a race. 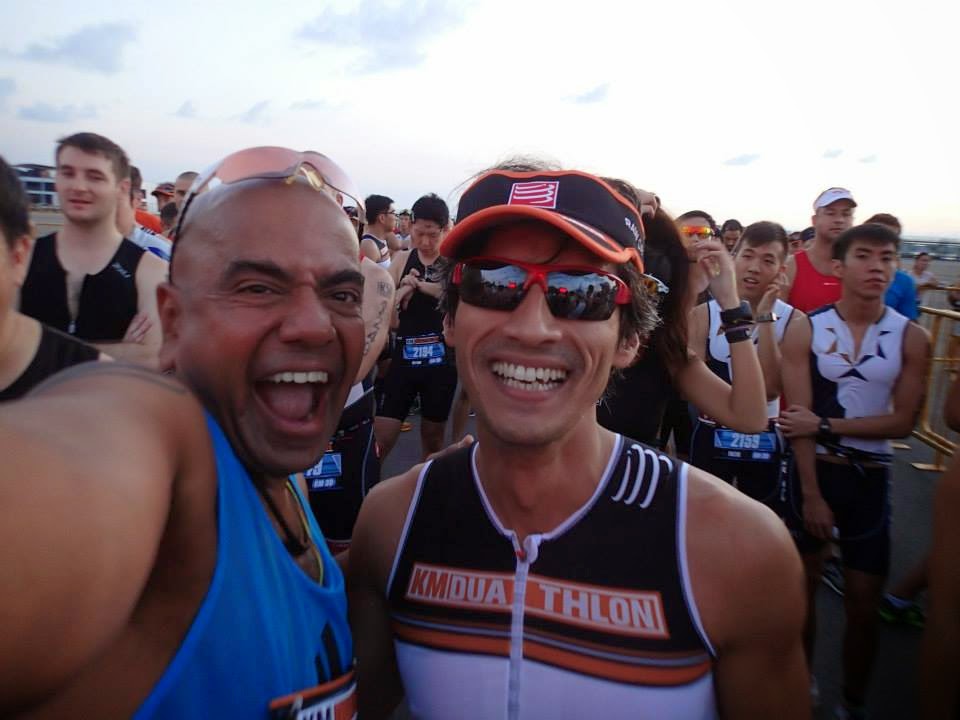 With the imitable, Funny-Man, Marathon Mohan (with more than 250 marathons under his belt) 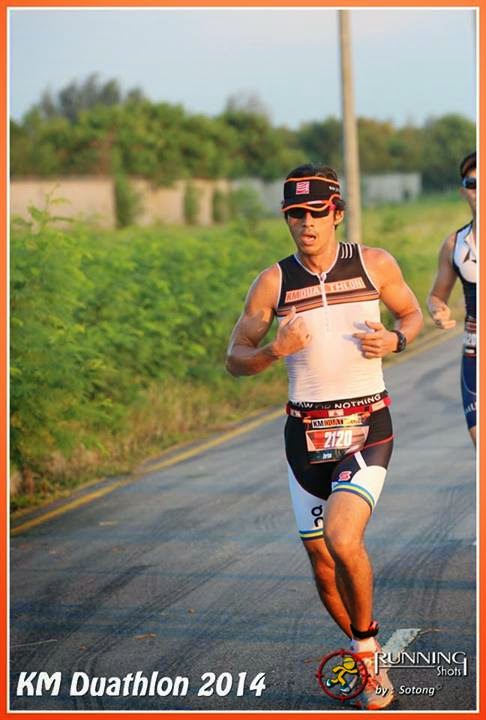 A cruel second, 10km run placated by the rising heat and fatigue.
On the second run: After a 2-minute transition, which included the consumption of two salt-capsules (CrampFix) and water, and a mild interaction (with David, Ser Luck and Jeffrey) I trundled off. The first kilometre was hard to run. In retrospect (wisdom of hindsight), I think I hit the gas too hard on the first 10km (44:04) which may have burnt up one extra match. You have a finite number of matches in your 'box' (body), and if these are consumed too soon, the remainder of the race becomes harsh. Pacing is a critical part of racing, so training your body to consume both fat and sugar is a key goal of training. I managed a slower (by exactly eight minutes) second lap with 52:04, which was still within my goal. It was a struggle for the first 5km, I assure you.

The winners in my category did very well with timings of 2:28, 2:30, and 2:36. I dragged my sorry behind just behind the top women (60km) who did 2:50, and I assured myself with a 2:53 finish. I was happily switching places with her for most of the 4-lap ride. She was a strong and competent competitor! Race emcee 'Voice of Triathlon' Ross Sarpani enthusiastically called me, and I acknowledge gratefully my sub-3 hour entry into the finisher-chute. He kept the energy positive and high from start to end.

The Recovery Tent proved to be more fun and cooling, and finishers were pampered with a plethora of cooling delights such as cold Heineken and Asahi beer, fruity slurpee from two dispensing-machines, cold Gatorade, cold wet-towels, fruit, and a buffet-spread. There were cold-shower units to partake in, if one wished. I talked to a few finishers, including two who fell off their bikes earlier, and yet completed their respective races. Such true grit is admirable as the pain and discomfort is factored into an already grueling race.

Other highlights for me included seeing my triathlon and marathon friends, such as Marathon Mohan on his first duathlon (still motivating runners on with his whistle, verbal encouragement, and ever-ready camera); Adrian Mok, Teo Ser Luck (Guest-of-Honour and participant), Jeffrey Foo (organiser), Winston Wong, and David 'Yellowfish' Lim. I stayed on until the prize-giving ceremony was over. It was also satisfying to see a cheque of $6,200.00 presented to the charity known as CARE. I appreciate it when charity and sports mix, and both sides benefit as synergistic collaborators.

In summary, the race was well-organised by Infinitus Productions, with a clear route, adequate feed-stations, friendly volunteers, and a desirable recovery-tent. The participants' positive attitude added to the air of friendly (but intense) competition. I look forward to next year's edition. Such races, when timed properly provide useful evaluations that can be used to chart one's progress. I am glad my CrossFit/strength sessions have translated into actual muscular power and speed. Final assessment: On-track and on-target for a (hopeful) PB in Cebu. 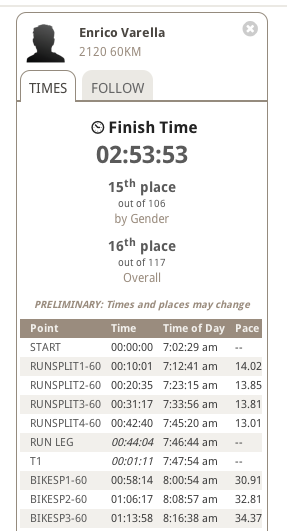 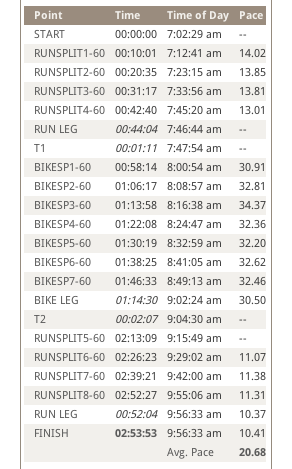 The Benefits of Training Solo (Part 1)

I have been training, predominantly, alone for the last two years. My race performance has been mixed, yet I have ticked off a few boxes on my Bucket List. Here are some salient advantages of training solo:

1) You respect other people's time, by not wasting their time waiting for you to arrive.
2) You save time, as you can start/stop at your own will and decision.
3) You enjoy greater flexibility of activities and duration.
4) You can integrate a workout at any time of your waking hours.
5) You decide on your routes, pathways and course of action.
6) You determine your own pace and speed.
7) You are not pressured or influenced by another person.
8) You will not be 'dropped' for your slowness.
9) You simulate race-day conditions, which is to race at a non-draft distance.
10) You can sleep in, if the weather is inclement and you need more rest. 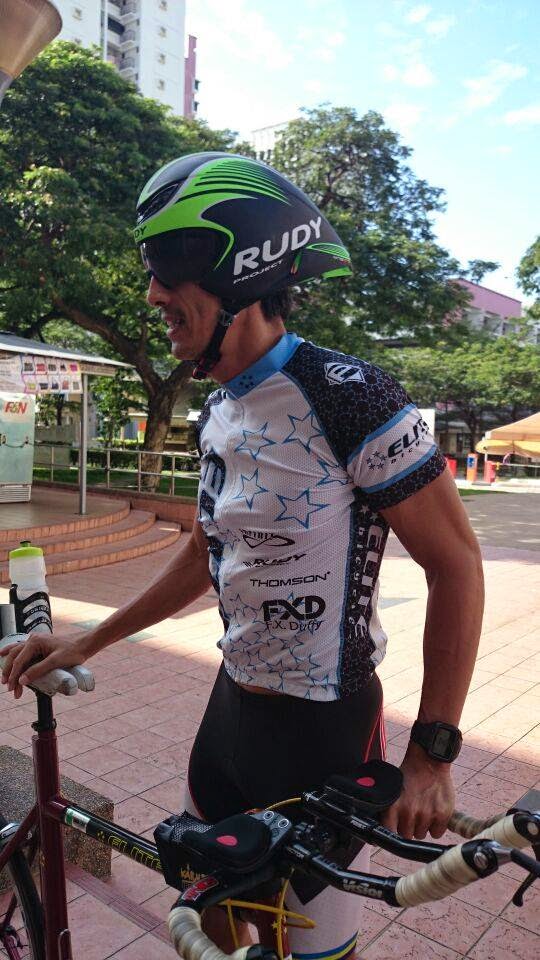 Photo-credit: Paul
Posted by Enrico Varella at 10:32 PM No comments:

A First Time For New Experiences 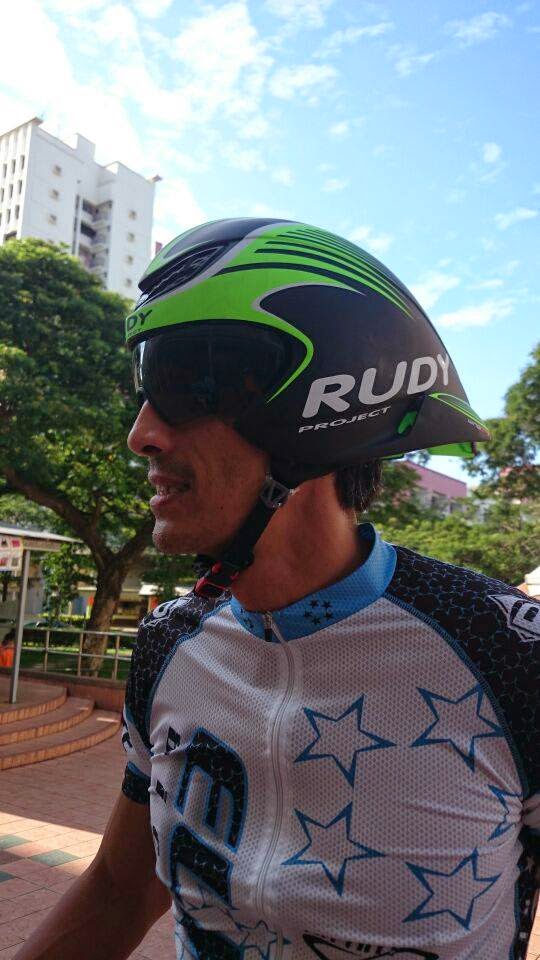 I tested my first aero-helmet this morning: the Rudy Project Wing 57, complete with snap-on visor. Perhaps, due to poor mounting on my part, my visor popped out halfway during my ride.

I have not used an aero-helmet as I never thought I was fast enough to use it. In recent weeks, while preparing for my A-races, I decided to use this 'advantage'. I felt that my head was tighter, warmer, and I could hear the wind whistling in my ear (against the head-winds). I am reminded of the cliche of 'There's a first time for everything'. I must admit that I perceived i had a raised self-esteem. This was evident by my enthusiasm to lead my small squad of riders, Kenneth and Paul on the flat sections and on the slopes. 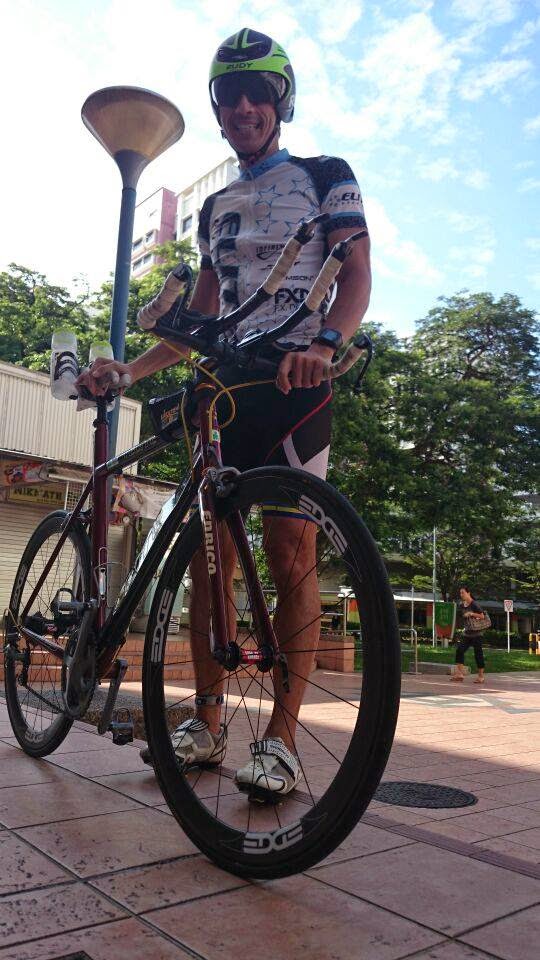 After my short ride (about 45km comprising some sustained velocities), I did a 10km run. This was my second 'ride-run brick' in a week. Last Sunday, I ran until the 8km mark when I started to fade, and walked/jogged the remainder. Today, I completed the full 10km in about 48:50, which was a sub-4:55min/km pace. I was pleased with myself as it was a hot morning, and I managed to hold my tempo pace.

I look forward to the next few workouts before next Sunday's KM Duathlon, which comprises a format of 10km run-40km ride-10km run. My new helmet will accompany me on this race, as well as in the Ironman 70.3 Cebu.

Leadership Lessons: When was your last 'new experience'? How was that like for you? What did you enjoy about it?
Posted by Enrico Varella at 10:07 PM 1 comment: