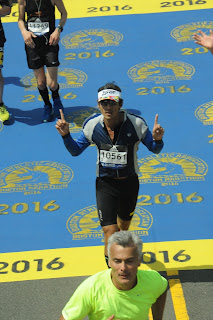 It has been about a month since I completed Boston Marathon 2016, in its 120th edition. These were the highlights for me. 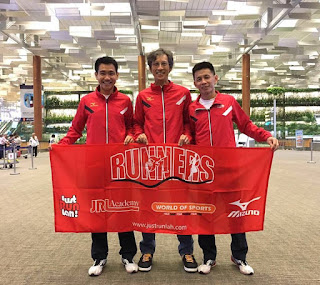 I met my team-members at Changi Airport: Coach Lexus and assistant-coach Zhi Yong
It felt good the second time round. My first was in 2014, Boston Strong. I managed to qualify after one missed opportunity in 2011, in the Hong Kong Marathon.My next BQ came in 2013 and 2015, both earned in the Gold Coast Marathon in Australia. The climate suits many Asian marathoners as it is cool, but not cold. Plus, the course is a fast course.

I missed the BQ-within-Boston by 2 minutes with my 3 hour 32 minutes and 4 second finish. With each year's cutoff hovering just under 3 minutes, I was off by 5 minutes. I was pleased  that several of my friends from Singapore earned BQs, which was done under slightly warmer conditions this year. I was pleased my injuries healed before the race, having suffered a sprained left ankle and suspected calf sprain/tear. With my BV Sport compression-socks and lighter Mizuno running shoes, I cleared the 42.195km in decent time. 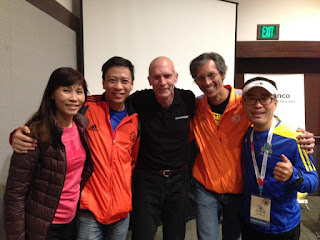 We met CRO of Runners World - Bart Yasso. It was a real treat to meet the creator of the Yasso 800's
I held back on the first 10km, as it was mostly downhill. This year had more women participating, and I was gladly 'out-chicked' by this wide and deep field of great runners of all age-groups. My last 10km was hard, as I heated up a little and had to hold back. Although I was stronger on the hills this year, the do sap the legs. I improved a total of 16 minutes over 2014, and moved up the top-31 percent of the overall field. for that, I am grateful for the three-run-sessions per week I had with my new running group, F1Runners and the JRLAcademy of runners. The diet of interval-track sessions, strength-endurance were adequate to give me a very good Return On Investment (ROI) on my training. The rest of the time I spent on strengthening my body with cycling, swimming and circuit-training/kettle-bell training. 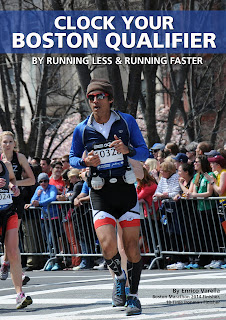 I applied what I learned over the years in my book 'Clocking Your Boston Qualifier: Run Less; Run Faster', and so was assured by my wisdom gleaned from experience and experts. In fact, one of my interviewees in my book - Andrew Cheong - earned a strong BQ of 3:26. He is a proponent of FIRST, and runs three key workouts a week: one long, one tempo, and one speed session. 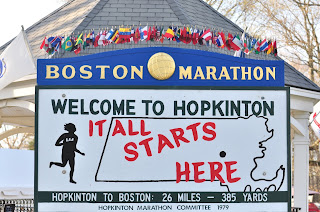 It was a richly rewarding second outing to Boston, and the magic of this race never ceases to amaze me throughout the entire point-to-point course. The spectator support was generous and encouraging. For the first-time Boston marathoner, there will be many memories to relish over.

I hope to return in 2017, and qualify at the end of this year in cooler climates. 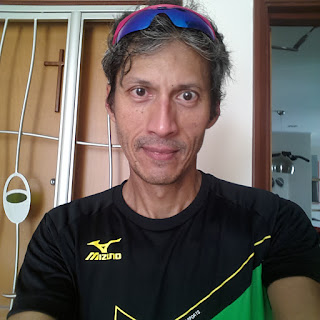 It has been a while since my last post, and fresh from my second completion of the Boston Marathon 2016, I share these thoughts. Since my relative 'absence', I have published my book on running, completed Boston Marathon, earned new sponsors, and acquired new wisdom.

These are my training tools for my next Iron-distance race - Challenge Roth. All the opinions are entirely and truthfully mine, and the products are either on review (or seeding) or on sponsorship. 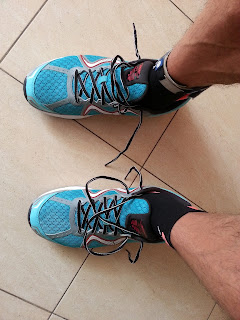 I have been using BV Sport compression wear for a few months, and I can attest to their French-made functionality. Of the four styles and designs, I have found physical support when I was injured (sprain ankle and suspected torn/sprained calf muscles on the same left leg) before Boston Marathon, so that I could train and race through the injury. I survived one interval track session, and one strength-endurance session (road) with the high-socks.

When you use compression-wear, ensure the following conditions and considerations:

1) Get one near-medical grade standards. After all, compression-wear and wraps were designed to reduce swelling/oedema from acute inflammation. I completed Boston Marathon 2016 with BV Sport compression socks as part of my RICES treatment: Rest, Ice, Compression, Elevation and Support. It addresses all five factors if you keep the area immobile, and insert ice cubes underneath the fabric (and against your skin) after each run. My ankle was puffy after each high-intensity run and circuit-training session.
2) Compression-wear does not work in water! Avoid swimming in them, as they get stretched and your tactile ('feeling' sensations on your skin) ability will not be as clear in water as the liquid medium seeps between skin and fabric.
3) Compression-wear works best on its tautness and firmness. If you lose bodyweight through dehydration or fat-loss, the tension of the attire against your skin and muscles will be reduced. Therefore, fit is important in order to gain the most benefits from such therapeutic and training devices.
4) Hand-wash them to extend their life-span. Avoid over-soaking as it may lead to shrinkage or, otherwise from rough machine-wash. 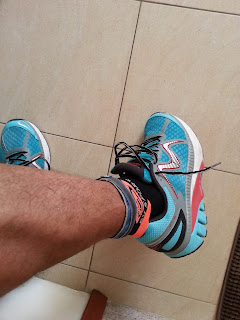 I have been running, occasionally, on the MBT GT-16 shoes. This pair of shoes appears more built-up with its perimeter of sole - like Hoka - and are, interestingly, light enough. If you are a long-distance runner, and suffer from sore soles (say, from mild PF), these may be a solution for you. I ran two rounds in them in Central Park, New York City and over several, recent, 10km social runs. They weigh as much as some of the lighter, popular models - 355g for a US size-9 shoe. The ASICS Gel Kayano weighs 309g for the same reference size.

The advantage of these MBT designs are that the deliberate weight distribution shifts your footfall near to the mid-sole or fore-foot position. Some running shoes use 'lugs' or 'steps' that create an imbalance forwards when you run, encouraging toe-off. This model and its sister creations, work on the physics of simplicity: weighted front. I attempted to run on the heels, and it was fairly challenging.

Ensure:
1) You get a half-size larger. Your feet swells when undergoing physical activity.
2) Replace the laces for those with better grip, or tie a double-knot.
3) You run in them several times to get use to its chunkiness. It is supportive, I assure you. 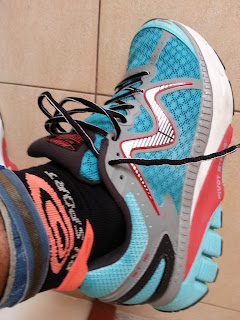 Like all new products you use, give them at least 3-5 sessions to break in, before judging them. Above all, feel and fit should be weighted heavier against aesthetics and design. Weight can become negligible after training adaptations. I will review the racing model shortly.
Posted by Enrico Varella at 7:00 PM No comments: