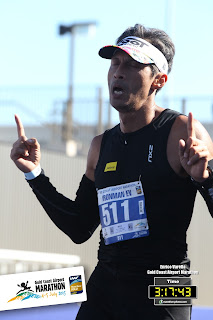 5 July 2015, Sunday, Gold Coast, Brisbane, Australia. I crossed the marathon finishing-line in 3:17:43: Another Boston Qualifying (BQ) time and, hopefully, a shot at the 120th edition of the Boston Marathon.

I was, nowhere close to a 3-hour finish, and I was not expecting to do so. What with less than five weeks of run-specific preparation, I was aiming for a sub-3:25:00 finish (for my age-group). In my mind, a 3:20:00 finish would have been gratifying and cleansed me of the disappointment of my first-ever, DQ/DNF at Ironman Lanzarote in late-May. 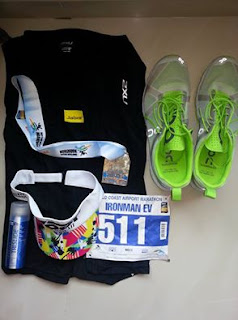 Race Morning: I awoke a little later at 4.30am. The race was 7.20am. It was chilly, but with no sign of rain. I wrapped myself warmly up, and made my first cup of Bullet Coffee (coffee with coconut oil), a daily ritual for the past two years. I had a microwaved cheese-bun, a CrampFix salt capsule, and some water. I took some time to dress up, using a new silicon-based lubricant on possible chaffed areas. I used my Jabra-sponsored two-piece tri-suit (a norm at all my races), double-tied my laces, and adjusted the fit of my visor. I took the G-Link tram, which was free for runners and family, to the race-site.

Start-Pen: After queuing for a last pee-break, I positioned myself  in Pen A, which was for those who were aiming for 3:15:00 or less. Two pacers were there with blue balloons; they were friendly, but contained their excitement. If I were a pacer, I would be concerned about my end of the bargain – to lead runners to within their race goals. I swallowed a packet of Hammer Nutrition Gel with adequate water, and proceeded to warm up. I jogged slowly on the spot, to get my heart-rate up, and warm my muscles and raise my core-temperature. I stopped when a lady sang the Australian national anthem. I continued jogging until the countdown. No familiar runners were near me, so I was going alone.

When the gun went off, I jogged towards the start-line, activated my Garmin 910XT watch. I was mindful to keep my pace within my race-pace of 4:37min/km for the first kilometre. I set my watch to remind me of every kilometre (and pace) completed.

At the 2km-mark, I had to dodge deftly past runners to pee. I knew I was building up tension at the starting-pen and had to remove this distraction. Upon my exit, I told myself I had to recover time to get near the 3:15 Pacers. In the next few kilometres, my splits were hitting 4:30min/km and even 4:20min/km. From my experience, I knew I could not keep up with this pace unless I wanted to risk premature fatigue. After crossing the 10km mark (and overtaking a few Singaporean runners) in about 46 minutes, I held back my pace. 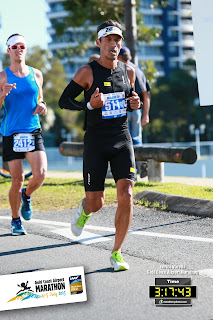 From then onwards, I used every subsequent 5km as my pacing intervals. When I crossed the 21km mark in 1:38, I knew I was on-target for 3:20:00. Whether I could hold this pace was a question-mark. So focused on my situation, that I did regular mental and physical checks: gait, relaxing my upper-body, hydration, fueling, foot-strikes, breathing, and more. Keeping sight of my pacers was crucial, if I were to secure a BQ. I never caught up with them, eventually, however I was just behind 400-500 metres behind them. 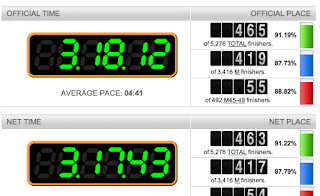 My strategy was simple: Hold a pace of 4:30-4:50min/km, throughout the race. Accelerate past runners when I can, especially on the slopes. My training on the Fort Road long bridge (in Singapore) gave me the confidence and competency to take on the last 10km worth of mild slopes that I was familiar with. When you can overtake runners, and consistently so, you are certainly in grand territory. However, with about 6,000 runners with a deep field of fast and strong runners, my ranking was about 463rd.

I was hoping to maintain 4:30min/km pace, however ended up with 4:40min/km. My last 2.2km was done at 4:30min/km. It was unpleasant, as I had to dig deep, and suffer the onslaught and assault of fatigue. I remember the words of Ironman triathlon champion, Belinda Granger: 'Prepare to suffer. Prepare to suffer even more!' What she meant was the race will test you, and you will need to push yourself as far as you intend to go. I assure you, it will hurt, or have a degree of pronounced discomfort. 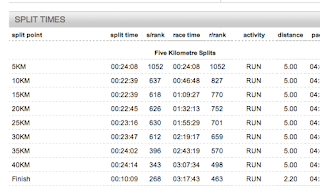 I was elated, yet relieved to achieve my third BQ. Nutrition-wise, I drank a cup of water (only) at all aid-stations, four electrolyte capsules, and three packets of gels during the marathon. I did not walk at all, and I was pleased with that. I had achieved my goal of securing a BQ and getting my demons of disappointment off my back. I was only 54 seconds off my previous BQ/PB of 3:16:49. The difference between two marathons on the same course was narrow. Plus, my pee-break could have attributed to my perceived 'lost of speed'. In theory, I could have done a 3:15 and earned a new PB/PR. Nevertheless, I was stoked to achieve this performance with limited training period of six weeks. Most marathoners spend about 16-20 weeks to prepare adequately. 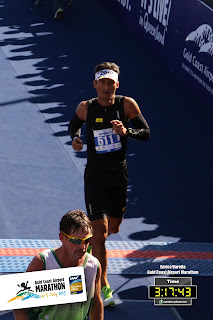 Training-wise, I was glad that the 3-4 sessions (only) per week worked well again. Seriously, the Return on Investment (ROI) was high for my training investment. My longest run was 28km split into two sessions. My short runs were 12km done at tempo, or time trial pace. My few running sessions with Andrew Cheong (a Boston Marathon 2012 finisher) were useful, even though I could not keep up with him at the end. My residual fitness from training for an Ironman gave me the aerobic base to do more intense run-specific workouts: no junk-miles, included cross-training and strength-building, and adequate sleep. 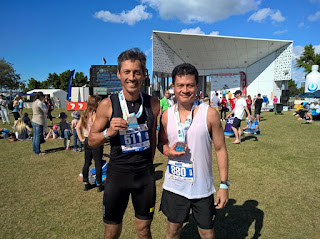 With this healthy performance, I look forward to Ironman 70.3 in Cebu, The Philippines in early-August; and Ironman Western Australia in early-December. Meanwhile, I will not run in any more marathons unless it falls within a 226km multi-sport endurance format.

I will report on my performance in Cebu soon. Let us assess how the ‘Run Less, Run Faster’ can be applied to long-distance triathlon. Onwards to finishing my first Ebook related to this field of endeavour. Stay tuned!
Posted by Enrico Varella at 12:15 AM 3 comments: