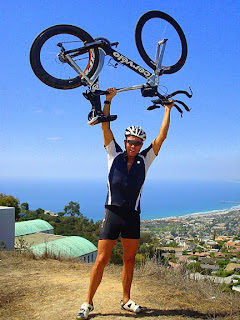 Have you learned some tricks along the way that might help other like-minded entrepreneurs and triathletes?
One is to find a place to live and work that is somewhere you actually want to be. I picked La Jolla, CA, and then built an industry here. It is paradise, and it's great to be able to work very hard when you know it's always nice outside and you can fit in workouts anytime.
How did you injure your inner ear membrane and how did it affect you?
At the University of California San Diego Masters workout, I jumped in the deep end of the pool really quickly and went straight to the bottom of the diving area. The implosive force was like a gunshot going off, and ripped my inner ear membrane, causing what is called a fistula in my inner ear. The tear immediately caused a clogged feeling, ringing, then dizziness, then extreme tinnitus, which is -- for those that don't know -- a ringing in the ear so loud it's hard to sleep, hear or think. Unfortunately, it's also sometimes an indicator of something more serious. I underwent a series of tests over the next few months, including blood tests, audiology tests, then CAT scans and MRIs to determine that I didn’t have a brain tumor or anything that serious. Luckily, it was a fistula caused by the accident, but unfortunately, the fistula left me unable to do anything physical for an extended period. The prescription for healing a fistula is a triathlete's nightmare - bed rest.
I ended up enduring several months of inactivity, and a year of tinnitus. Many of those weeks were strict bed rest - no coughing, no sneezing, no laughing, no pressure on the ear in any way, shape or form. And, for a while, no talking. From a sound perspective, it was quiet bed rest, but the reality was it was far from quiet - the tinnitus in my right ear sounded like someone was next to me blowing on a trumpet, all the time. As an active person, rest is a very hard thing to do. As a triathlete, I was used to controlling my physical environment and the uncontrolled, omnipresent blaring sound in my head was unbearable. It was made worse by the fact that they accelerated my obsessive-compulsive triathlon and work tendencies by giving me two high dose burst treatments of a corticosteroid called Prednisone, which intensified a host of anxious emotions that only those who have ever experienced it can understand. It was a nightmare, albeit filled with wonderful life lessons - thankfully it's over, and I'm back.
Many triathletes and recreational athletes deal with knee issues. What exactly happened when you fractured your knees in college? How did you recover?
I had incredible experiences at St. Lawrence University, but it all started with a big challenge. My freshman year, two things happened. One, I was really excited to try out for the lacrosse team but I got cut. They already had two goalies for a very small squad, which was essentially a club team. It was hard, but I understood that it was appropriate with a junior and senior ahead of me. Second, I fractured my knee falling on the ice at St. Lawrence campus one morning. This was just a run across the quad, part of my preseason training to make the club team to stay sharp and prepare for the next year. When I fell I came down on my knee and fractured the medial condyle. I was on crutches and had to undergo several surgeries and began a long journey of realization for me: "Hey, okay, you're active and athletic, but guess what? You can lose it in a nanosecond."
After a series of knee surgeries and many months not knowing whether or not I could run again, or if I could even walk, my perspective changed quite a bit. During this time, luckily, I immersed myself in debate and academics. But, at the same time I felt tremendous anxiety about being on the sidelines. Luckily, at the end of my college career, the knee healed in a really positive way. I sustained no ligament or tendon damage. The knee healed itself and I started running in the mornings with my college roommate Adam Thornborough, who was on the track team. It was so great! I felt like Forrest Gump -- once I recovered, I never wanted to stop running.
Have you been involved in other sports, and have they contributed to your triathlon career?
I’ve had a lifetime full of sports. I played freshman football in high school, but that wasn't for me. Then I started playing lacrosse, which was a good fit and I pursued it with all my heart. My high school lacrosse coach was very influential in my life. Pat Smith really showed what dedication and training was required to master a sport. He taught me that if you apply your very best effort, results will come. Ultimately I became a very good lacrosse goalie, the number one high school lacrosse goalie in the state of Connecticut for part of one season. Though it was just a few weeks of high school, that period when I made more saves than anyone in the state, was, for me, an incredibly powerful experience -- seeing the magic that can happen as part of a team, and experiencing the benefits of fitness. 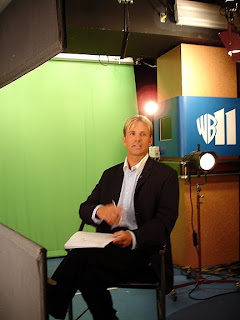 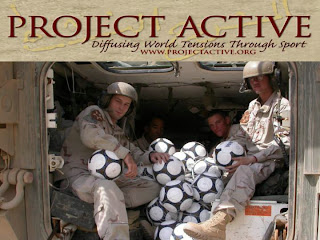 What exactly does your La Jolla Foundation do? Tell us more about Project Active.
The La Jolla Foundation is the parent foundation encompassing several projects. Project Active delivers athletic equipment to war-torn areas. It's our attempt to defuse world tension through the positive influence of sport. Project Einstein is designed to help some talented children move forward in their educational career. And Project Bright Idea is aimed at identifying and funding social and business innovations.
Through Project Active we send athletic equipment around the world to many of the 41 areas of armed conflict defined by the United Nations. We've sent soccer balls to Afghanistan, Iraq and several hot zones in Africa. We've sent soccer balls strapped to nets on the top of tanks, and then distributed to the children in a war zone.
We also contributed to a mission that liberated child soldiers in Africa and put them in a soccer camp where everyone was kept safe from harm. It was an incredible. When you see the emotions of these kids who had been trained to fire machine guns and to kill for warlords now being trained to play soccer, you can't hold back a smile.
What was your inspiration to start Project Active?
I was on a bike ride in the Camp Pendleton Marine Base in Oceanside prior to Ironman California in 2000. At the time, I was hearing and listening to what was happening around the world and that set me to thinking about the issues of war and peace as I was biking past the tanks and seeing the military exercises in Camp Pendleton. The night before, I’d watched a television interview with a suicide bomber. His bomb did not go off and so he was captured and interviewed by a television news crew. The correspondent asked the bomber, "Would you go into this café and blow everyone up for your cause?" And he said, "Absolutely. I would do anything for my cause." Then the interviewer asked him: "You're a soccer fan?" And he said, "Yes." "Your team is X." And he said, "Yes." And the interviewer said, "Would you go into your soccer stadium and explode the bomb if they told you it was for the cause?" At that moment the would-be suicide bomber broke down crying and said, "No, I couldn't do that." And she said, "You know, that's your mission.” And he said, "I can't do that. I could never do that." And she said, "Why?" And he said, "Because that's my team."
So, I thought, "Hey, there's the answer." In Western society, so much of human aggression is channeled in positive ways via national and local club and college sporting events. I thought, at the end of the day, if we're going to plant the seeds of peace in these areas it should come through sport. I wrote an article in Triathlete magazine which read, "We need to defuse world tension by planting the seeds of sport in the children." It wasn't an original idea. Other people had been working on initiatives like this before. But in response I got e-mails from triathletes in various regions around the world the initiative was sparked.
Any final advice for entrepreneurs and athletes?
Align what you love with your work. That makes a dynamic difference. A successful career comes from a mindset where you don't want work to be something you have to do. You want work to be something you want to do because it's your passion. It’s your life; it’s your career. Just as Henry David Thoreau wrote, many people live lives of quiet desperation and don’t know what to do about it. I lecture at the University of San Diego, Stanford University and UCLA and I often encounter students and recent graduates who say, "Hey, I'm bored working in a cubicle."
I'll then ask them how many people work in their organization. And they'll say, "Oh, there's about 200." And I'll say, "How many do you know?" And they'll say, "Three." And so, my challenge to them is this: “Have a breakfast, a lunch, or a coffee five days a week minimum with someone new. Even if you just meet one different person in that organization every day – you can cycle through the lessons and the lifestyles and the connectivity with the 200 or 300 people that work there in a year.”
The value in a business isn't typically putting something in an envelope and mailing it to someone so they pay you something for it. The diamonds we all seek are buried in the relationships we build. Too many people go to work and simply do whatever they're told. As opposed to going to work to build connections with people that they're going to end up spending 30 percent of their day with. Interacting with others and learning the life intelligence they have garnered over the years is essential for success.
Photo-credits: Triathlete magazine
Posted by Enrico Varella at 2:41 AM