Ripped To The Bone

Well not exactly. Almost there, though!

Ripped to the bone is a bodybuilder’s term for extremely low body-fat on a muscular body. The human body needs to survive with a minimum of 3 percent body-fat to nourish mainly our brain and hormonal system. 3-5 percent body-fat reveals the deep fibrous structure of muscles. Sharp abdominal muscles show once you hit single-digit body-fat. Hit the lower-end of the fat level and you are talking about muscles in your buttocks and thigh screaming prime cuts!
I am concerned that I may lose too much fat, and muscle during my taper. In 2009 at Clearwater, Florida I had a bad ride at the Ironman 70.3 World Championships. I attributed it to jet-lag, a loss of 2.5kg of bodyweight (muscle and fluid) and a measured body-fat level of 7.8 percent. I prefer my body-fat to hover around 10-12 percent year-round as endurance athletes benefit from a bank of available calories from stored fat. The intramuscular fat is more useful than the pudgy, subcutaneous, adipose fat. Eating badly and excessive fatty foods is not useful, and only adds useless weight outside of muscles instead of inside it. 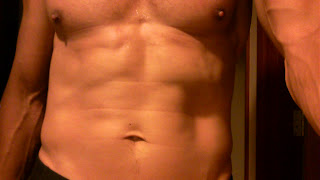 Bodyfat levels two weeks ago.
As this is tapering week, I hope to build a storehouse of reserves that will see me through my intended race-pace without meeting premature fatigue. 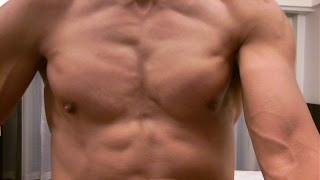 Bodyfat level now.
Fat is not the enemy, although aesthetically it has been associated with blurring the definition. Decide on how much fat you choose to carry on-season and off-season, and work with it.
Posted by Enrico Varella at 12:02 AM

hThis is such an interesting blog. You are very knowledgeable about this subject. Please check out my site.
Swim lessons