How often do you monitor yourself?

This means assessing your efforts, physical condition, and performance.

When you exercise, do you monitor the following: Perceived Rate of Exertion (PRE), heart-rate (zones), sweating, breathing, physical discomforts, etc. External measurements may be collected from instruments on speed, cadence, distance, and power.

Your medical practitioner measures your health status with questions (diagnosis), examination of your ENT (ear, nose and throat), blood pressure, heart-lung (stethoscope), and other tests. The information gleaned (usually absence of troubling symptoms, or presence of significant symptoms) will be used to assess the health condition, and therefore a prescription be derived from the analysis.

Family history is part of the indicators for predicting the future. Although the past may not necessarily determine our future, it can indicate likely behaviors. That is how tradition and custom factor into our lifestyle. If you have more stressors in your life, it may influence how your body copes with the changes. Again, predicators are not predictors.

For patients prescribed cholesterol-lowering drugs, like statins it essential to monitor side effects (which may be serious or fatal) like muscle weakness, memory loss, numbness and pain. An active athlete may be affected by both the physical (and physiological) and mental effects of such drug usage. It can impair your performance, lead to a reduction in exercise, and thus reduce quality of life, which is a push-back effect not desired.

By monitoring our performance and symptoms, we deduce the internal conditions from the external. It is a logical pathway derived from inductive and deductive reasoning. Sometimes, we have to move backwards in order to move forwards.

Leadership Lessons: How do you monitor your performance? How do you know you are behaving appropriately? How does your current condition influence your future choices? How does your wisdom (gleaned from experience) determine your choices and decisions?
Posted by Enrico Varella at 6:37 PM No comments:

This is an alphabetical summary of essential factors in performing, successfully, at endurance, multi-sports including triathlons and marathons. This list is evolving, subject to my current state of awareness, wisdom and relevance. I suggest doing up your own list as your progress and grow in your sport.

A = Antioxidants are necessary to reduce premature aging
B = Breathe deeply, regularly, and naturally (mouth or nose)
C = Core strength is key to proper exercise posture/gait
D = Discipline is a useful value to develop
E = Endurance is built through time and consistency
F = Fresh and raw food are consumed everyday
G = Set clear Goals and commit
H = High-Intensity exercise, but short duration
I = Involve your family in your achievements and adventures
J = Join training groups to improve on your abilities
K = Kill negative thoughts, doubts and fears
L = Learn constantly from your personal experience and from others
M = Make every session count, however short
N = No one way is the only right way
O = Oxygenate your body with aerobic activity
P = Pacing is key to completing and Personal Bests (PBs).
Q = Quitting should be postponed unless you are injured
R = Race regularly and learn to apply tactics
S = Sleep adequately and more, as it is anabolic
T = Take your time to build your fitness
U = Utilise the assistance of coaches and experts
V = Vanity makes you look good
W = Wait your turn, no need to draft or cheat
X = X marks things on your Bucket List achieved
Y = Yesterday was an easy day
Z = Zero-carbs is not necessary and not smart
Posted by Enrico Varella at 10:40 PM No comments:

Inspirational Story of a Cyclist

My friend, Fraser Sharp was interviewed for this piece. He and I will race in Ironman New Zealand again in March. He is a very strong swimmer and cyclist, with a focus on qualifying for Kona. If you like to support his cause, please do so. 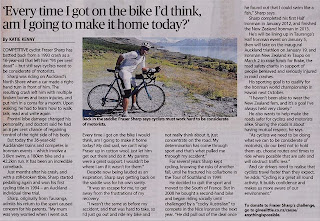 Iron-Horsing In The New Year

This is my first post of the year. Already this morning, I rode my 60km to usher in the spirit of the new year. After a heavy season of preparing for the Ironman World Championships in Kona, I took a casual approach to my last marathon of the year. It was at the Singapore Marathon where I sustained a hip injury, which is on the mend.

I have integrated at least three outdoor sessions with buddies, Kenneth and Paul. We ride on Sundays, and this morning we chose to ride on the coat-tail of the new year. We joked yesterday that 'We will see each other next year!' and it meant 'tomorrow'. 31 December is the only day in the year that is separated by a year and a day. Likewise, each last day of the month presupposes the next month. 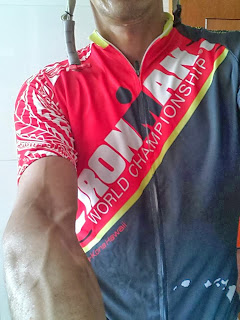 First time wearing this jersey I bought two months ago.
Anyway, it felt good to ride with strong riders. I have to regain my cycling speed (on Taupo's rolling course), although I still own a fairly strong aerobic base. All three rides for me were made thriving only on 'aqua', purely on water and working within my aerobic zone. Training on an empty stomach (well, I have black coffee and coconut oil for breakfast) triggers off the utilisation of fatty acids (and triglycerides). I have also begun working hard on my core strength, and muscle mass. Much of the aerobic training has led to a cannibalisation of muscle mass, which translates to loss of strength and power. Being too 'skinny' is not useful. Instead, a higher body density is. Thus, I aim to build more lean tissue weight and a higher body-fat count. The water is Lake Taupo is cold, and the windy conditions can lead to excessive loss of body heat and enhanced caloric expenditure.

Eights weeks to my 17th Ironman in Lake Taupo. Then, IM Melbourne, and then Boston Marathon. Recovery and recuperation will be key to my athletic performance, and possible PB timings. There will be 10 special slots for Kona up for grabs in a special, 30th anniversary lottery. It being my fifth assault on this course, I will earn five tickets for the draw. Will lightning strike twice on the same place?
Posted by Enrico Varella at 10:54 PM 1 comment: