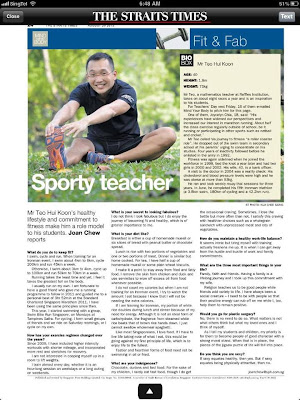 This is today's feature on my training and racing buddy, Teo Hui Koon. Enjoy his perspectives and sense of humility.
Credit: Article courtesy of Joan Chew, The Straits Times (Singapore).

Posted by Enrico Varella at 11:07 PM No comments:

One of My Main Inspirations In Sports: Kor Hong Fatt 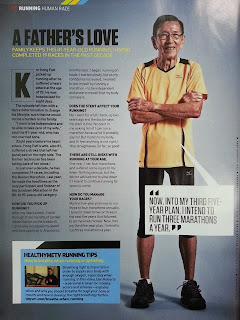 Mr Kor Hong Fatt, Dad of my Ironman triathlon friend, Edward is an inspiration to many local runners. He is a marathoner, who has completed the Boston Marathon. Always cheerful and positive, he adds spunk to every race. He runs his own race, and he races well for an octogenerian. I trust you will find this short feature useful and motivating.
Posted by Enrico Varella at 11:51 PM No comments: 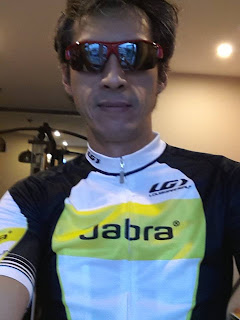 Bedecked in my new Jabra-sponsored LG bike-bib/top (Shades: Ryders).
It is about six weeks out to Kona. With two key races within a fortnight, I am primed for completing my 16th Ironman through the holy grail of long-distance triathlons. This weekend, I will race in the 21km race of the Singapore Bay Run. Two weeks later, I will race in a 10km race - The Yellow Ribbon Run - my third in four years. These two races will act as assessment tests of my fitness for Kona, at least in my lead-up to a sub-4 hour, marathon within the 226km triathlon. My best, marathon-within-an-Ironman was 4:27, set in Lake Taupo in March 2013. With a BQ earned at Gold Coast Marathon, I aim to nab this elusive, personal best (PB) timing, hopefully, on A'lii Drive in Kailua-Kona on 12 October. 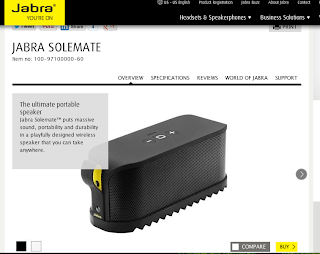 A large block of high-volume training...awaits me. Beginning tomorrow, I will complete a 6-hour indoor-ride. It has always been my goal to do a six-hour block on the turbo-trainer. Friends have remarked that it would be 'mental' and 'an act of discipline'. It would, probably, be however I intend to work out my nutritional needs for six hours of continuous cycling, as well as physiological responses during this period. I will set up all my bottles of Hammer Nutrition 'Perpeteum' and water. My MacBook, enjoined by my new Jabra 'Solemate' will amplify my favourite Kona Ironman races found on YouTube. I will enjoy the inspirational stories of cancer-recovered competitors, The Hoyts, Blazeman (The Poet Warrior), Sister Madonna Budder, Scott Molina, etc.

A snapshot of my training block a week ago, looks something like this: 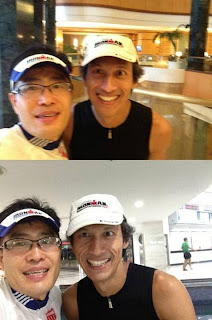 That's pretty much my training block for the last 11 days. Races constitute anaerobic or speed sessions, limited to two a week. Aerobic training is still core, with pockets of speed intervals integrated into the sessions. My intake of calories has increased, so I don't look as skinny as I did two months ago. My bodyfat is just as low, although my intake of essential fats has risen, with fats coming from coconut oil, olive oil, and some butter. I have consumed my carbohydrates mainly through fruit, vegetables, rice and wheat wraps (I am not allergic to gluten). My protein intake has been kept high due to a need for recovery from heavy workouts. I take a day off every 5-6 days, and I give myself a treat for meals. I follow the Paleo Diet approach of 80:20. Allow foods you enjoy (refined foods) up to 20 percent of your total nutrition. Life should be dictated by your choices and decisions. If it is not fun, why do it?
Posted by Enrico Varella at 9:38 PM No comments: 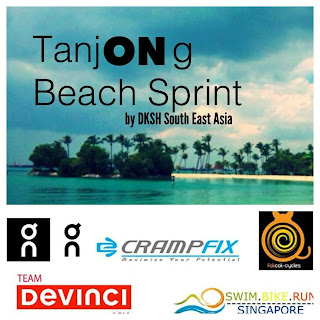 (Saturday, 8.15am, Tanjung Beach, Sentosa Island, Singapore). Yesterday, about 50 participants of the fortnightly, open-water swim group (of TriFam or Triathlon Family) raced in our second, annual biathlon sprint. We had a good mix of experienced and fairly new endurance athletes racing. This year, we had more sponsorship, thanks in large part to the organsing-team from team Swim, Bike, Run Singapore. Incidentally, On Shoes is one of my sponsors for my Ironman race in Kona. 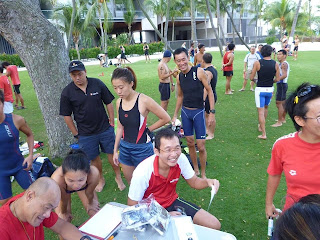 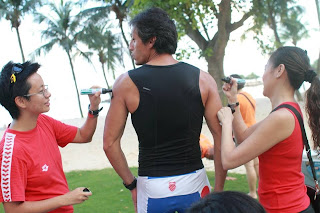 It has been a while since I was body-marked. (Ignore my Zoolander pout).
I enjoyed the race as it was my first, and the previous year I was a volunteer marshall. It felt good to be on the other side of the fence. It was a good confidence-booster for me, that I could swim at Ironman race-pace and still do a fast run. Overall, we had fun and had loads of photographs to choose from. 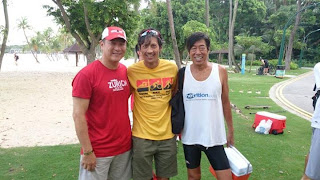 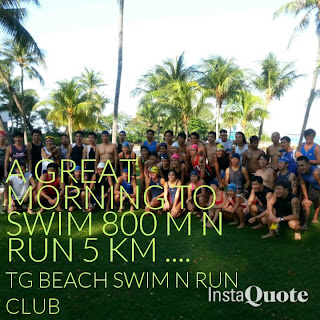 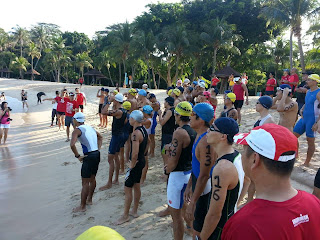 Before the swim (random coloured caps). 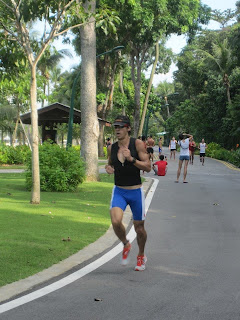 Final sprint to the end-point, and an overall finish in the top-30 percent range (13th position). 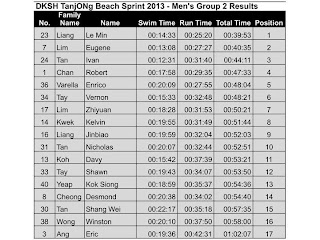 Third-fastest in my grouping, behind more youthful runners. 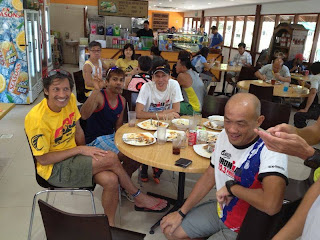 The best part! Lunch and the company of volunteers, officials and participants.

Posted by Enrico Varella at 10:10 PM No comments:

It has been a busy week, although I reduced my Ironman-training hours. I decided to recover from my mild shoulder injury - probably, bursitis or tendinitis of my left should-joint - incurred from Ironman 70.3 Philippines, Cebu two weekends ago. I had to, intentionally, reduce my training mileage and frequency due to this annoyingly painful situation. My condition has improved after Monday evening's light swim. I look forward to a quick recovery and resuming my long-distance swims, and Monday's Master Swim Class. 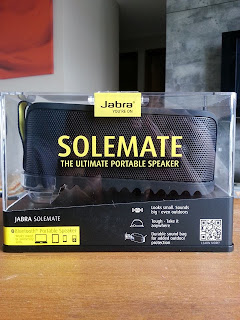 I have a duathlon sprint on Saturday at the Tanjung Beach, Sentosa Island. The swim is a to-fro one-lap swim of 800m (high-tide) followed by a 5km run. Considering my lack of ruthlessness in the water, I would have to 'sprint' my way to credible finish. It will be an 'anaerobic' training day, so I will suck it in and plow my way 'tactically' through. 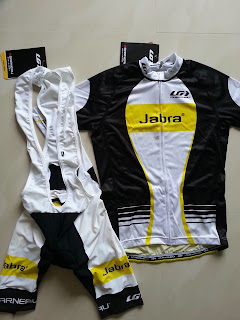 Today, I received my SOLEMATE from Jabra, as well as my cycling attire. Already, after posting initial photographs of this training kit, a few of my friends expressed their interest in purchasing this model. I am pleased to be wearing what 3-time Ironman World Champion, Craig 'Crowie' Alexander is wearing. 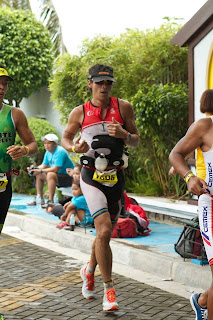 I appreciate my sponsors for placing their faith in my abilities for my Big Dance in Kona-Hawaii on 12 October. I believe we will mutually benefit from our collaboration. Earning product and race sponsors, orientates my focus into another level of commitment and relevance. I take pride in representing my supporters.
Posted by Enrico Varella at 12:37 AM No comments: 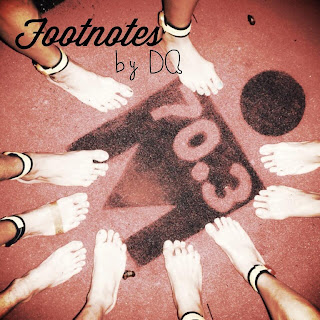 Although the Ironman 70.3 Philippines (on 4 August) was not an A-race for me, yet it was an assessment of my fitness and readiness for my next A-race: World Championships in Kona-Hawaii on 12 October. Between these two events, will be a 21km run and a 10km run. Both these runs will be attempts at Personal Best (PB) times. I hope to go below-1:30 for my half-marathon, and sub-44:00 for my 10km. 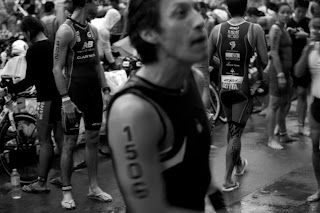 I enjoyed my half-Ironman on Cebu Island, as I managed to stick to my Ironman race pace. I was off my PB by only eight minutes, which I could have equalled if I wanted to if this was my A-race. My ranking improved to a top-15 percent of a 2,100-wide field of seasoned and new participants. Although I was only #22 in my age-group (45-49 male), I paced myself adequately over the three disciplines to reduce my initial deficit.

I experienced no gastrointestinal (GI) distress, as I consumed only Hammer Nutrition's Perpeteum, mixed to the correct measure and consistency. I only had to spend an inordinate amount of time peeing in the Transition area (T1), and another at an aid-station during the half-marathon. I was adequately hydrated, picking up water along the ride at all aid-stations. 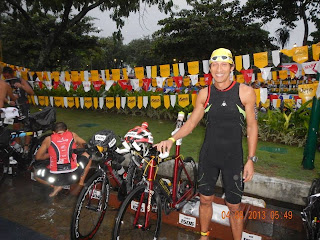 As I was in the final waves (with the women), the swim was packed with stragglers and struggling neophytes. It was a wet-start, and most of us were barely near the start-line when the gun fired. The route was an anti-clockwise rectangle. As I was decked in my new speed-suit (non-neoprene regulation version), I suffered a collection of abrasion streaks. I had to adjust my suit during the swim twice. Note to self: more lubricant next time. I settled into an easy pace, and emerged from the water in a reasonable time. 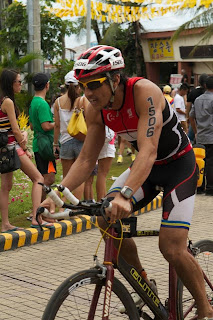 The ride was riddled with drafting riders. Perhaps, the new riders did not know how to respond to an over-taking rider from their left and ended up drafting. I attempted to educate a few riders, but it seemed to fall or deaf ears or ignorance. The safety-distance between riders on the flat stretch was 7 metres, and the overtaking rider has 15 seconds to make the pass. The overtaken rider needs to drop back to 7m for the pass to be complete. Riders were riding two-across, with packs in tight formation (read: drafting). I understood that the Draft Marshals caught a few errant riders, but mostly for litterbugs. It was assuring to see at least two Elite riders (bespoke bike builder), including pro-triathlete Arland M. Many riders suffered punctured tyres, and it caused a fair bit of distress. The pre-race, overnight, rain caused debris to be strewn on various sections of the ride-course. 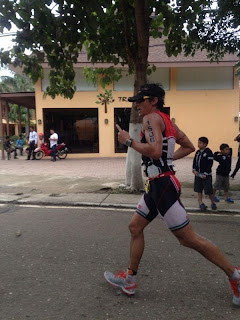 Like the ride, the two-lap run route had spectators line both sides of the street. The volunteers at aid-station were very helpful, and the spectators were highly encouraging. The participants included famous people and local celebrities, including one of the singers from 'Black-Eyed Peas' (who was riding for charity). They cheered us enthusiastically on, including calling us 'idol!' It felt good to be acknowledged. I experienced a long 800m run into the finishing-chute, and I had to reckon with a photo-finish when I overtook a younger runner at the last 50m. He grabbed the banner before I did, although I secured its end. Emcee, Whit 'Voice of Ironman' Raymond called me in, and identified my friendly adversary as my younger counterpart. I had enough 'in my tank' to complete this dash, which saw me through a self-satisfied completion. 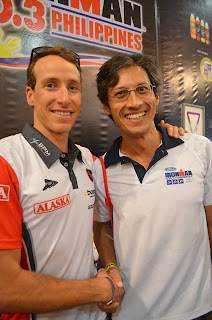 My photo-opportunity with reigning Kona King, Pete 'PJ' Jacobs (who I will see again in Kona in nine week's time).
Overall, it was a splendidly-run race. I would do it again - next year. 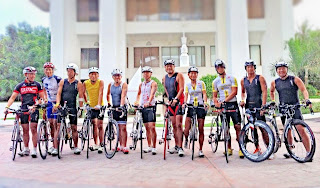