Lessons Learnt From A Recent Race

This morning, I raced my first race after the Berlin Marathon (four week ago). That dismal performance on the cool, world-class, German marathon course, was done with almost no training, as I had to fully heal from a stress fracture on my foot.  This morning’s 10-miler race was a test of my mettle and might under testing (hot and humid) conditions. I aimed to complete the race in 1:25 (which would be my best-case scenario), or worst. Having considered my structured but minimal training for speed, I decided to pace myself at about 5:15-5:30 minutes/kilometre. In effect, I would play by intuition and my watch.

I had just under-six hours of sleep; it sufficed, as I felt reasonably fresh. My healing gums after last week’s wisdom-teeth extraction still bore a migraine-like headache on my left temple. I hoped that the adrenaline rush and ensuing excitement would erase the discomfort temporarily. Having such a procedure and surgery done at such a later age, is not encouraged as the healing processed is delayed and extended. 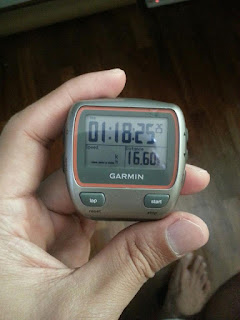 My breakfast was a cup of black coffee, chased later with a glass of Hammer Nutrition ‘Perpeteum’ and some water. After last year’s lesson where I hit the wall early at about the 11K mark, I decided to have some available complex carbohydrates in my system. One more cup followed before I headed for the start-line. My plan was to consume a cup of water at every station as I suspected the morning would get hotter. I stuck to my intuitive pace, using the participants in front of me as my pacers. I referred to my race-pace on my Garmin 310XT, so as to commit closely to my strategy and race-goals. If I could sustain a 5min/K pace, I would be stoked as I was only hitting 5:20min/K over my last three 10K training runs (at 155bpm maximum). 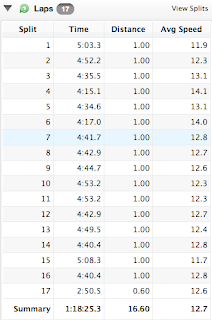 All in all, it was a great race for me as I realized my goals of regaining my racing ‘mojo’ before the Standard Chartered Singapore Marathon (on 2 December). My uploaded data speaks for itself. The only lapse on the 15K-mark was due to slowing my pace for a breather, and stopping for a drink at the aid-station. I also wanted to have a comfortable run into the finishing-chute. I have one more 10K trail race to go, before the next Big Hit. I hope to hold a 5:00min/K pace for my next marathon. A PB in Singapore would be a bonus (last set in 2009). Meanwhile, its back to loads of core-work, road-running, and cross-training. My sports-doctor, Dr Roger Tien emphasised NO interval training and hill-running. 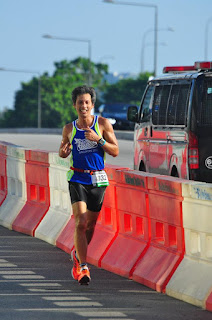