It is less than 24 hours away from the Berlin Marathon.

I enjoyed the 3-day race-fair, which is three stations from where I am domiciled while in this history-rich city in Germany. I spent 3 hours in total, discovering new products, making my purchases, drinking non-alcoholic beer (sampling was in abundance), and meeting race champions. My race-kit collection was smooth, fast, and fuss-free. There were enough volunteers and counters to not create any bottlenecks. I met many runners swathed in almost every marathon/half-marathon known to humankind. I saw skinny runners bedecked in sweaters from NYC Marathon, Boston Marathon, Tokyo Marathon, Rock & Roll Marathon, and Berlin Marathon. 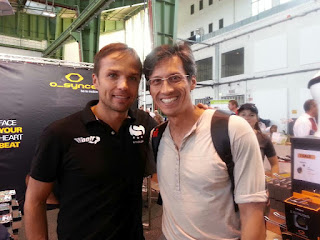 I was very pleased to meet Normann Stadler, Ironman world champion in 2004 and 2006. He was working at the Woolf booth, and I thought he looked familiar. As I write this, Normann is well and healthy after his surgery a few ago, and he is fit to race. However, this family-man does not feel strongly compelled to race. The German, uber-biker, has proven himself twice over that he is one of the living legends of the 226K triathlon. It was a rare treat to meet this friendly champion and fiercely competitive triathlete. 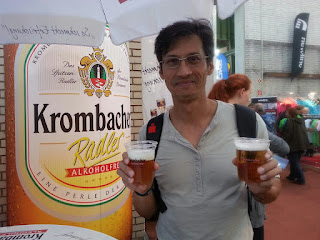 I also saw the world-record setting shoes of champion marathoners, on display at the Adidas hall. Yes, Adidas owns a hall to itself with its huge display of running and triathlon-related products. I enjoyed playing with the large, interactive, panel that chronicled new shoes. The new Adi-Zero 2 is a very light, minimalist shoe that was featured at this gigantic race-fair. 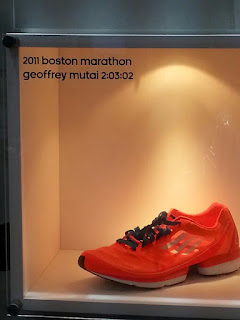 I wish all runners and roller-blading athletes a safe race!
Posted by Enrico Varella at 6:25 PM