Are You A Groupie?

Kevin blogged about his first group ride in weeks; he completed IMWA in December. Read his blog about the exploits of this elite-level, age-group, triathlete – and he is fast!

A groupie is a person who chooses to hang out with a celebrity. This was clearly described in the film, Almost Famous. The groupie offers himself or herself to musicians, who return the favour with the residual notoriety or fame that rubs off them. 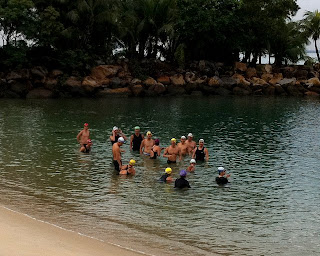 Having recently returned to group training for swimming and running, I have made several discoveries. Mainly, I can engage more in competitive type efforts. We can push each other harder, or encourage each other further. Plus, we can simulate race-day pace when we decide to test each other’s mettle. Monday evening pool swim session has activated my interest in pacing at a higher threshold. I am also inspired by the progress of my fellow endurance athletes. Hui Koon is improving nicely (in all three disciplines) after his PB at IMWA, and his training regime for Cairns Challenge has begun.
This evening, after a punishing rainfall, I took off for a run. It was raining cats and dogs, and when I left my home I stepped into a poodle. I had the good luck to pace after Danny Lee, who was finishing his 10K run, and stalked him for about 3K at 4:30 pace. After we bade farewell, I continued at a moderate pace (my heart-rate monitor did not register anything!), relying instead on my breathing, Perceived Rate of Exertion (PRE), and my intuition. I timed at 52-plus minutes at the 11K mark, so knew I was on-track for a sub-1:45, half-marathon timing. I opted not to drink much fluid, and ran at an easier pace of 4:50-4:55 to compensate, as I wanted to tap on my fatty acid system, thus the higher aerobic/low anaerobic pace.
I picked up the pace at the last 3K as I was starting to fatigue, but sprinted eagerly home to a much-appreciated time. One more month to the Hong Kong Marathon, and I hope to do reasonably well. Fingers crossed!
Posted by Enrico Varella at 9:53 PM

You're too kind, Enrico. I hardly consider myself as elite. But I do give it my best whenever I can. Thanks for the mention!