I missed a few posts late last week, as I was ‘Gone fishing’. Actually, I was racing in the Gold Cost Airport Marathon 2011. The aforementioned phrase is used when one actually went on a fishing vacation. However, today we use it to indicate that we are on vacation. This is similar to the online version of a website ‘Under Construction’, which is pretty much akin to preparing for your next endurance race.

Participating in endurance sports require patience and tenacity and, obviously, physical and mental endurance. To endure is to persist and continue, until the deed is done. The real test begins when you had a tough day in the office – you hit the wall, experienced fatigue, and your body fails on you – guano happens! Thus, resilience is about how high you bounce back after you had a fall. Move on!
Courtesy of Australia’s premier Running Couple, Sue & Andrew O’Brien share a link on an inspirational endurance athlete. I trust that it helps us open our eyes wider, or view a new perspective on our limitations and perceived limitations. 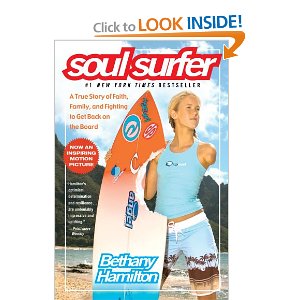 I was onboard the SIA flight from Brisbane to Singapore last night, and watched a new film inspired by true events. ‘Soul Surfer’ is about the real-life story of a teenage surfer, Bethany Hamilton who had her left arm ripped off by a Great White shark while surfing. She survives to resume surfing, and eventually becomes a national-ranked surfer, champion, and professional surfer! This new film stars Helen Hunt and Dennis Quaid as her onscreen parents; there is a scene where Bethany gains perspective by teaching a young girl to surf in the aftermath of the tsunami-stricken shores of Phuket in 2004. American Idol winner, Carrie Underwood co-stars as her Sunday-School teacher; she describes the notion of perspective in one effective scene.
Give this film a go! Surf’s up!
Posted by Enrico Varella at 10:31 AM