Was tracking the professionals and Singapore Team last night on IronmanLive.com. I suffered a constipated digital bit stream so managed to hear pockets of stuttering commentary and frozen images. I enjoyed the commentary by the seasoned and funny, ex-Ironman World Champion Greg ‘Welchie’ Welch of Australia.

This will, officially, be the last time that the half-Ironman world championships would be held at Clearwater, Florida. Next year, qualifiers will converge at Las Vegas – City of Sin. Perhaps, the home of non-M-Dot Silverman will be renamed City of Skins, named after all the compression tights worn by elite-level triathletes.
Having raced there in 2008 and 2009, I was privileged to be racing alongside all the top-notch age-groupers. I was humbled by the competitive spirit and fierce focus of the athletes. The world appears smaller when your achievements pale in comparison to others around the world. There are dozens with fitness levels off the charts. Can you imagine finishing the 113K, three-discipline, race in about four hours! At the Singapore 70.3, if you finish around five hours, the community takes notice and bows for you. At the World Championships, this is the average timing for more than half the field!
It is an amazing experience to qualify for the 70.3 World’s. My best experience was my first in 2008 where I went with a partially sponsored team. Adidas and Power Bar generously sponsored us. We put in effort to ensure our team had some additional assistance, as we already took our personal financial investment to race, qualify, and compete there. The 30-hour flight to Clearwater was challenging, and residual jetlag prior to race day was demanding on our anxious minds and body. The airport arguments about excess baggage may leave you breathless with frustration so be prepared to pay more than expected. Or else, waste unnecessary emotional energy in a no-win situation.
If you have a chance to qualify in Asia, do it in Singapore or Philippines. Join the queue and if they have enough slots left you may just get the chance of a lifetime to compete with the best and score a PB.
Once again – well done on a splendid performance at the World’s! 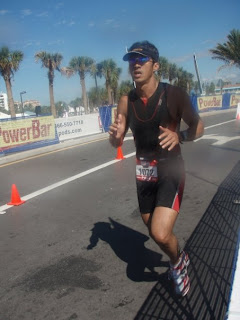 Photo-caption: My first attempt and finish at Clearwater in 2008. I have fond memories racing with my team comprising Wilson Low, Grace Chan and Brian Tan.
Posted by Enrico Varella at 2:30 PM