1. An assembly or meeting.
2. An assemblage of people; group or crowd.
3. A collection, assemblage, or compilation of anything.
This weekend was about gatherings. 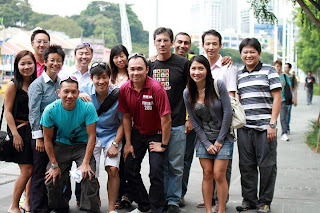 It began with our second anniversary buffet lunch at the Merchant Court Hotel with our Saturday Lagoon Swim group. The twenty of us who gathered, shared many laughs, and perspectives about our personal progress. I discovered that Vincent Yang and I would be applying for our Boston Marathon slots tomorrow morning; we are both on the borderline list (less than five minutes). Poor Clifford burnt his right fingers on a hot ladle; it may have absorbed the heat directly from the flame. 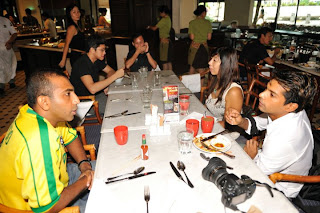 I then had dinner at Caroline’s place, before she skates off soon to her new UN role. Clifford showed us how his blisters had expanded in size, caused by edema (water retention) in order to cool and protect the scaled tissue. He skipped this morning’s Desaru long ride, as he cannot grip his brakes and handlebars without pain. Instead, Matthew – our other fearless leader – led a team of rowdy riders into Desaru for an edifying and unifying ride; some will be doing Ironman Western Australia this December. 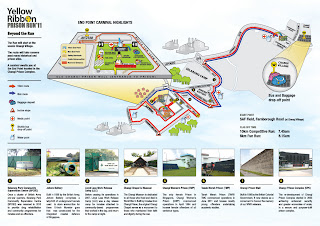 The series of gatherings were capped this morning with the Yellow Ribbon Run – already in its third year. About 9,000 participants showed up to do either the Competitive 10K or Non-Competitive 6K Fun Run that carved a historical route in the east of Singapore. Three members of parliament flagged us off, through a gate that resembled the exit of the new Changi Prison. This symbolic gesture was about releasing ex-offenders from the second prison called discrimination. People deserve a second chance until they prove us wrong. Instead, allow them the chance to prove us right that rehabilitation works and we can re-orientate ourselves and seek new bearings. 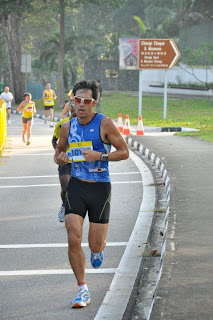 Running is a metaphor for creating a new purpose. Whether we seek fitness, enhance our health, boost our self-esteem, or feel fulfilled through a sense of achievement – running allows us to feel free, and free ourselves from our mental shackles, inhibitions and self-imposed limitations. Looking at the numerous happy faces this morning, I can only pay tribute to this natural sport of moving fast on two legs. Singapore Blade Runner was there at front of the start-line, and he sprung forth joyfully in his 10K challenge. 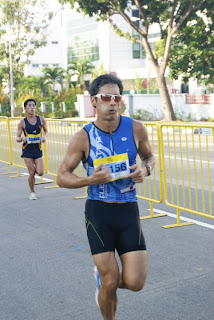 Annoying, my GPS lost it signal and I ran ‘blind’ throughout the race. I ran, mainly, by intuition and instinct, and struggled through a blindingly fast, first 4K before I settled down into a reasonable pace, and got out-chicked and out-run by better short-course runners. The route is, challengingly, hilly with enough slopes to upset your balance. I was relieved to cross just under-45 minutes (officially, 44th, with a time of 44:44). It is slightly similar to last year’s timing (where my champion chip did not work), and I felt a little flat in my legs after last week’s Mega-Tri race (2K swim, 102K ride, 27K run). I was impressed with many faster Masters and Youth runners. Jason Lawrence and Vivian Tang emerged as top male and female, respectively. Many youth runners were tearing down the route as if their lives depended on it – such was the commitment of the competitive runners. 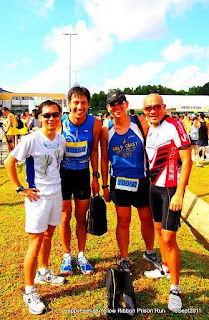