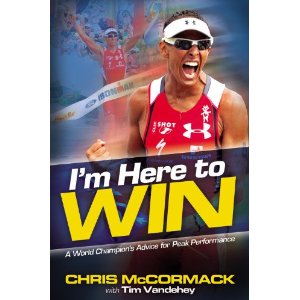 Chris ‘Macca’ McCormack is a world champion triathlete in both the long-course (such as Ironman) and short-course (Olympic Distance). He is also a two-time Ironman Triathlon World Champion (2007/2010). You may wish to read it to get a better grasp of one of triathlons most successful, and controversial champions.

If you read between the lines of his smack-talk, Macca reveals his mental strategies for staying a tour de force as a competitor, as well as his tactics for managing his adversaries in competition. He is the ultimate mind-game specialist after Muhammad Ali, the boxing legend – who Macca modeled his attitude after. Macca plays mind games very skillfully and with pronounced purpose. He begins with the end-game in mind.
Macca’s clarity of purpose echoes that of reality television series ‘Survivor’ where some less popular personalities utter, ‘I am here to win, not make friends!’ Described by his fellow competitor as brash, arrogant, cocky and loud, Macca is an extraverted sporting personality who has consistently backed up his talk. Interestingly, he won his second world title last year at the ripe age of 38 – probably, the oldest winner in the history of the Ironman race in Kona, Hawaii. Even his naysayers and harshest critics have to take a step back and review their criticism of him.
I enjoyed the biographical feel of the book – it is in Macca’s voice and lingo. One of the highlights for me was how he planned and prepared for his Ironman wins in Kona after a disastrous debut in 2002. At times contrarian, and at times disciplined to the bone, Macca describes it all – no holds barred. The extraverted Macca is fiercely competitive, abundantly misunderstood by competitors and the media, and yet respectful of his community. How he expresses his values is worth considering, whether it is his brutal honesty or deep respect for his opponents. His strategy on how to give constructive feedback (in public and in private) is an abject session in itself. He is also a hungry learner and he draws upon different sports to apply their strategies (including nutrition from bodybuilders, and the 4-set approach to swimming a day before a race). Macca’s profile is: one part athlete, one part student, one part coach, and one part strategist.
Interlaced within the chapters is his resume of achievements especially of his early years as a short-course specialist. Punctuated throughout the book, especially as a summary of key points, I’m Here To Win provides Macca’s (W)INSIGHTS – cliff-notes for his strategies. There is also a 16-week, professional athlete (‘who have the time to train and rest’) for an Ironman triathlon. Macca, however, cautions that it is a tough approach. He is also quick to remind us that he does have easy days and emphasizes rest after the 'key set' is done. Described as ‘fluffy training’ by his critics, Macca defends the need for rest as he has never been injured in his entire career. He calls his main training the ‘skeleton’ and fleshes it out with deliberate flexibility. The many examples, drawn from his competition experience, give meat to this book. There are behind-the-scenes conversations, including his relationships with the titanic Teutons, Faris Al-Sultan and Normann Stadler.
A full chapter is devoted to his motivations, including a touching tribute to his mother (of Maori descent). His chapter on his 2010 Kona comeback (Chapter 10: My Masterpiece) is a thesis on how his completely different approach to his mental game. Macca’s gameplan was flawless during its execution, which led to a perfect day and one of the most exciting races for a long while. I think it matched his 71 seconds lag behind Normann Stadler in 2006, where he came in second. Certainly, 2010 was where we were treated to a glimpse of what the ‘Iron War’ (Scott-Allen showdown) was probably like: the handshake, the few words uttered, and the crucial ascent up the final hill.
Buy it, read it a few times, and apply parts of his strategies that you are comfortable with. It is also a fun read that honestly delves into Macca’s mind, myth, and his methods. Macca is like a WWE superstar (in three disciplines), without the make-up and over-the-top antics. No-holds-barred, bold, courageous, honest and poignant: the stuff that sports legends are made of.
Posted by Enrico Varella at 11:57 AM