I collected my race-kit at about 4.30pm; it was a smooth and fast process since the post-office hour crowd emerged only an hour later. I went early to earn an easy run with Pete Jacobs – last weekend’s winner of Australia’s Long Course Triathlon. Nicole Gallagher, owner of triathlon coaching company, Beats Per Minute (BPM) organised this run for those who were available. I will have my formal run techniques clinic with Pete on Monday evening. There are slots available if you wish to join. Just write to Nicole@BPM-Sport.com for more information. I strongly believe that you will benefit from the additional speed, if you are racing competitively. I did, so I am recommending it. 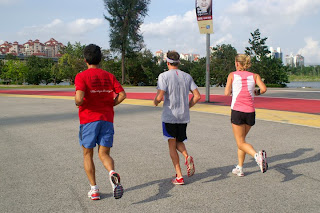 Pete advised me to activate my core more, mainly my gluteal muscles, and to relax my arms and legs (I admit I am not a graceful runner). From the sound of it, I seem to be chopping the ground a bit hard, instead of gliding over it with the flats of my shoes. He also urged me to stand tall and lift my body up, hips forward, and lean forward. Like swimming the front crawl, it can be a lot of information to process however that is the price to pay for learning how to run faster from one of the sports fastest. We ran along the Marina Bay, pass the F1 grandstand and past the iconic Singapore Flyer (think, London Eye). 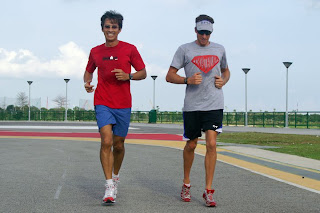 The race briefing was held on the 4th floor, in one of the humongous exhibition halls. This was followed by a fine buffet spread, one of the better one’s I’ve enjoyed in years. A lion dance, cultural dance and live band provided the entertainment for the evening. I was pleased to meet my friends from Crazy2Tri (sponsored by Toyota), and Triathlon Family/ENR regulars Matthew, Richard, Desmond, Lap Huan, Hui Koon, and Derek Lau (expatriate in Vietnam). I also met the legendary age-groupers like Victor Chan (60-year-old I have yet to beat – but, soon), ‘Cyborg’ Poon, and Kona-finisher Hannes (with the ever-fit Grace). Sports-photographer Richard Leong, finally, caught Faris Al-Sultan (after my alerting him) to sign his 30th Kona Anniversary book; he left deeply satisfied with both Faris’s John Hancock and photograph.
Thanks to Christopher Oh (picture, second from left) for this gem of a photograph we took at my second Ironman Malaysia in 2008. Faris, subsequently, won the title there by a large margin. 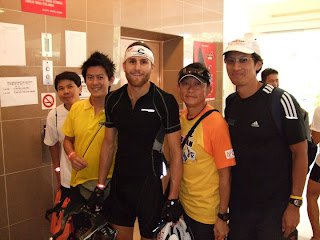 I was so pleased when fellow blogger, Kevin Siah of Perth said hello to me; he introduced me to his fiancée, Li-Ann too. I have come to know them from reading Kevin’s blog over the past year that this is a handsome and dedicated couple from Malaysia who seem to have made their home in Perth. Kevin is an elite age-grouper who, I believe, will do very well in Sunday’s race. All the best, Kevin!
The sextarian Victor, who is itching to do yet another Ironman will race on Sunday. He accompanied us on our way back, and I encouraged him to do the Hong Kong Marathon and I may have succeeded. He congratulated me on my recent marathon PB, for a course notorious for not being flat. Victor’s consistently early-3’30” timings for the marathon do qualify him for Boston – although he has not considered making the long and costly journey to Massachusetts to complete the Holy Grail of marathons.
The Saturday ENR Swim Group will be doing an easy, swim at Sentosa’s Tanjung Beach lagoon at 9.00am today. It was unfortunate that, just last week, a foreign national drowned there. We will take care of each other, as we always do. After that, we will check our bikes in, in the afternoon. Desmond is experiencing a rollercoaster of emotions since it is his first 70.3 race, and we wish him a successful finish. That would be a realistic and relevant goal, as he prepares for IMWA 2011.


Action-Photos: Richard Leong
Posted by Enrico Varella at 12:09 AM

Thanks for the mention Enrico, nice to meet you too! Haiya shy shy lah, not elite lah! All the best for the race, see you tomorrow!