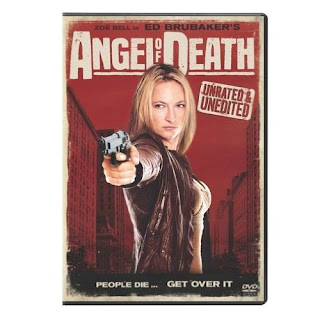 Now, in Angel of Death Bell plays a hit-woman (a.k.a assassin), Eve who suffers a near-fatal knife stab to her head. This causes Eve to be delusional and experience bipolar personality. Nutshell plot: ‘Very bad girl’ turns ‘good. The blade may have hit her amygdalla as she hunts down and eliminates the bad guys.

Shot in the genre of B-movies, it is a predictable take on a medley of classic cult-films like Reservoir Dogs, Kill Bill, Sin City and La Femme Nikita. I will warn viewers that there is explicit violence and heavy language.

Award-winning comic book writer, Ed Brubaker (Daredevil) borrows openly the style of Tarantino and Robert Rodigruez in latter's cult-film collaboration, Death Proof that introduced Bell to the forefront film world. In Death Proof, Bell is strapped to a waist-belt on the hood of the car travelling at breakneck speed.

There is no doubt that the attractive Bell can act and she is certainly athletic, dominating most of the screen-time. Fellow Kiwi, Lucy Lawless (Xena: Princess Warrior) plays a small guest role as the neighbour who meets an untimely demise in Eve’s abundant closet. Ted Raimi (Spiderman 3) son of horror/zombie flicks, Sam Raimi (Army of the Dead) has a cameo role, albeit with a sad ending. This film plays tribute to its predecessors, and director Paul Etheredge pays homage to the leading directors of our time. Incidentally, Tarantino worked in a DVD-store before he produced the landmark Pulp Fiction. Therefore, it pays to have a vision, and delivering on that vision. The commentary by both Bell and Brubaker are definitely worth listening. The bonus features include Eve’s Tip for Killing that plays on a dark sense of humour. More importantly, we get an inside look at Bell’s audition.

Leadership Lesson: None. Can’t we just take an occasional break from the serious stuff? Head for your nearby DVD store. Check under the expensive imported section. Or, buy direct from Amazon.com.