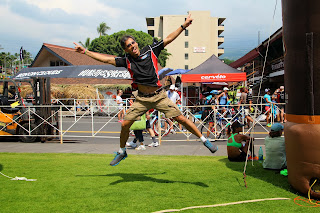 Rehearsal for my Welchie at the end-point.
My journey to the Ironman World Championships in Kailua-Kona began in the early-1980’s when I watched an episode of ABC Wide World of Sports. The scene of struggling athletes during the marathon leg, at night, was exciting and intriguing. My actual foray into endurance sports (mainly, the marathon began in 2004), and my first of a dozen of Ironman finishes was in 2006. To cut a long story shorter, I had a dismal 2012 racing Ironman Switzerland racing on a suspected hairline-fractured, left toe. I completed a challenging race, made more uncomfortable with an unstable foot. Two months of no-running activities (after a clear diagnosis through my first MRI scan) led to me to completing a disappointing 4:00 Berlin Marathon (my second attempt there since 2010). 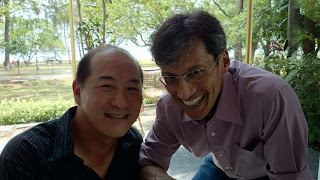 Through the egging of Clifford Lee (now, 'Kona-Clifford'), a slot winner in the newly-incepted Legacy Lottery I applied for my slot. Legacy Lottery applicants need to complete 12 M-Dot Ironman races to qualify for the lottery. Six hours before the sad event at this year’s Boston Marathon, I received an e-mail announcing my successful bid for a Kona slot. Six months of rigorous conditioning prepared me for my dream race of doing the Big Dance on the Big Island. Along the way, I earned my second Boston Qualifier (BQ) timing at the Gold Coast Airport Marathon (July), and earned a Boston Marathon slot in late-September. Two successful lotteries gave me closure for a dismal and disappointing racing year in 2012. With renewed sense of purpose and pure focus, I worked around a busy business year of teaching and consulting work.

I spent many hours building my aerobic base, focused on low heart-rate training on all three disciplines. I also shifted my nutritional needs to more unprocessed food and essential dietary fats (mainly organic virgin coconut oil and olive oil). I slept more, and rested whenever I could. I also adjust my body clock to awake early for a 1-2 hour ride (plus core stability work) before work. Three weeks before the race, I caught an infection and began to lose my voice after each day of teaching. I developed a cough and sniffles; symptoms of flu, so I decided to hold off swimming sessions and intense, speed, sessions. I would, otherwise, have been on tapering track were it not for this major distraction and surprise: dodged the first spanner in the gears. I had no excuse but managed this bodily inconvenience. I recall Dave Scott's words: 'Make no excuses!' 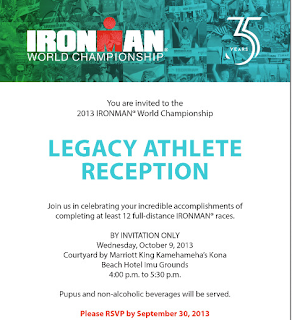 9 October: We arrived on Wednesday, three days before the race (hopefully enough to shake off jet-lag). It was a long flight on United Airlines, from Singapore to Narita (Japan) to Honolulu, and then to the Big Island. My first hairy moment was, on arriving in Narita, at the airport lounge we found out that we needed a piece of documentation for entry into the USA (despite the fact that we did not require travel visas) called ESTA by the US Customs authority. We were fortunate that we could apply for and pay US$14.00 for this document online, which we did. It was stressful, to say the least: Second spanner thrown at us, and dodged. (Note to self: check the requirements for travel documents for countries we have not visited for at least a year). 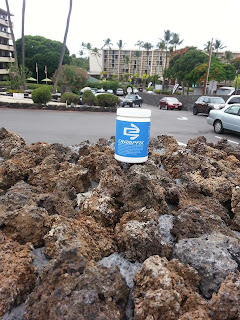 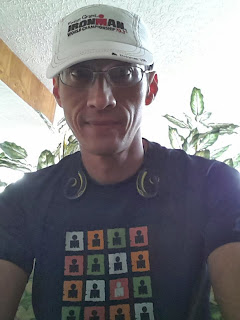 We checked into the Kona Seaside Hotel, which is adjacent to the official Ironman accommodation of the King Kamehameha Hotel. The perimeter-wall was made with lava-rocks, a natural resource from the island. My abode was less than 200 metres from the Kailua-Kona Pier, so it was convenient for the hefty price I paid. I planned for a fuss-free race check-in and check-out. Immediately, we had lunch at a nearby restaurant and then headed for the Registration site. A Japanese contingent, organised by a triathlon-travel group set up a tent outside the hotel, with a bike-mechanic to assemble and service all bikes. Tri-Travel is the main Ironman agent that arranges all your triathlon racing needs. It costs a premium, but I hear from friends that Tri-Travel removes the hassles for overseas participants. 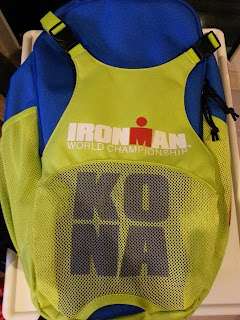 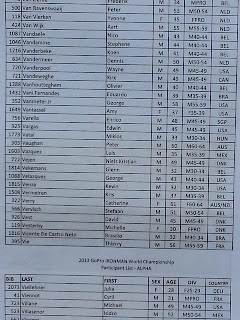 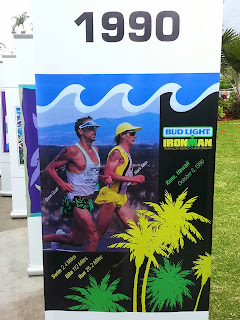 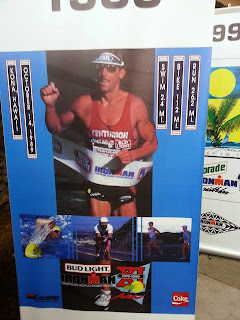 The race-registration was smooth and brisk. I basked in the glory of being there. I did not mind the mild queue; each of us had our chance and purpose. The race-pack was an attractive luminous-green, and I relished using it. In it, there was a set of colourful TYR goggles, a distinct luggage-tag (with the schedule of race-week), and race-bib, race-stickers and the precious silver-foil sticker for my bike. 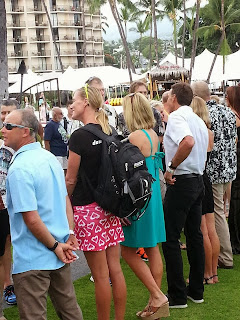 Meeting the Legends in Ironman. 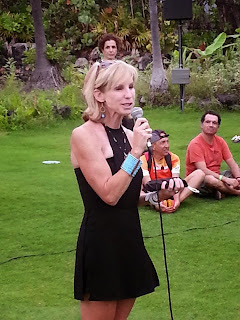 The Great Paula-Newby! She gave us a useful pep-talk. 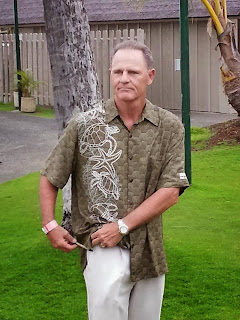 Voice-of-Ironman, Mike Riley. Waited for him to call me in, in Kona. 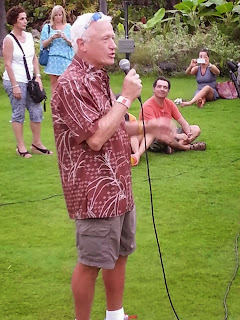 He put Ironman on TV and the world map: New Hall-of-Famer. 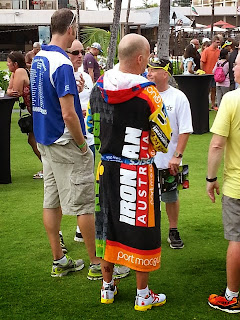 A robe fit for a king: This finisher has woven a bathrobe from all his Ironman finishes.
On the afternoon, I attended a must-go event: The Legacy Reception. I met the CEO (Messinck) and Vice-President of WTC, and met the legends of Ironman: Paula-Newby Fraser, Dave Scott, Heather Fuhr, Greg 'Welchie' Welch, Michellie-Jones, and Bob Babbit. It was a powerful experience which I will treasure. Welchie and I rehearsed the 'Welchie' (pose) which I delivered - hopefully - with justice: leap of joy, plus the tongue sticking out! 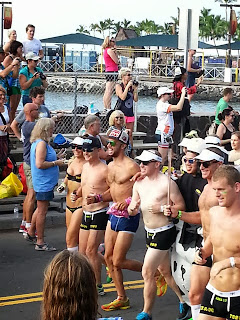 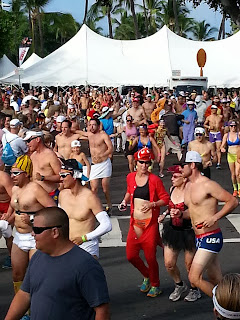 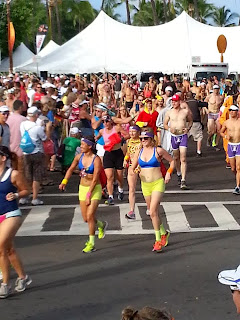 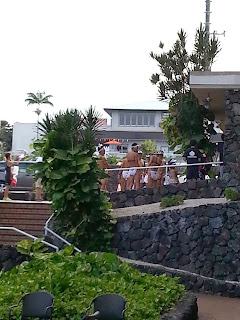 Bansai: Japanese Underpants Contingent.
The next day, I fixed up my bike and did an easy swim along part of the swim course. Before my swim, I watched the Underpants Run. I found out, later, that James ran with is Dad. It was an amazing array of undergarments worn by Ironman competitors, friends and family. I gave the run a pass as I would have been alone. The water was warm enough with clarity that enhanced the abundant marine life, teeming with coral, fish, turtles, and competitors. Most were age-groupers who look every inch of the Adonis and Amazonians who were race-ready and had the ‘Eye of the Tiger’. The three expatriates – Arnaud, James and Assad (who, eventually, won fifth in the 35-39 age group) – told me one common thing: Enjoy the race. It made perfect sense, since my goal was to qualify for Kona, and be race-ready to complete in reasonable time. Plus, I was on to this notion of finishing ahead of the celebrity Chef Gordon Ramsey, and former-football professional/Hall-of-Famer, Hines Ward. Both Ramsey and Ward lost a tremendous amount of weight in their year of intense and systematic preparation for the 226km triathlon. 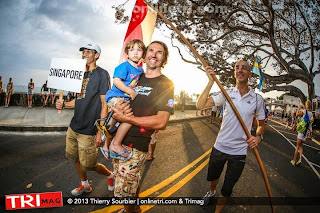 I joined the Parade of the Nations, which was slated for 5.00pm. Singapore-based expatriates, and second-time Kona qualifiers, Arnaud Selukov and James Middleditch accompanied me. I carried the placard for Singapore, while James carried our flag. Arnaud walked with us carrying his son, Mika. We were, probably, the smallest contingent there. We ended up at the race-exposition, which opened upon our arrival at the Expo venue. 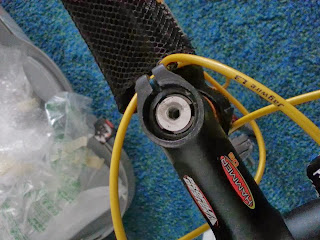 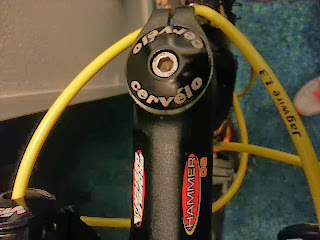 10 October: I had an easy day, since it was the Carbo-Party/Briefing night. The day’s drama of locating a substitute top-tube cap and M4 bolt (lost during TSA inspection) burnt up some of my focus. I was grateful to the mechanic at the Cervelo Booth for giving me these two key items, to secure my Elite Razor tri-bike into competition readiness. 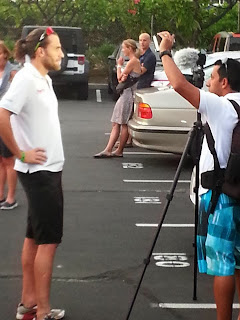 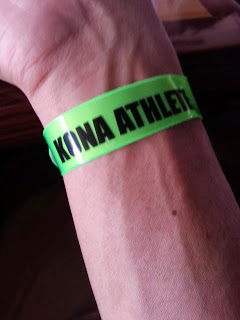 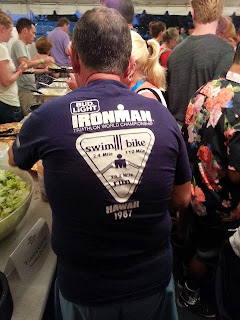 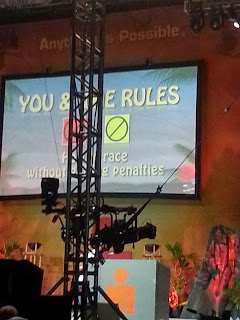 Carbo-Party/Race-Briefing was straight forward with nice preambles by co-emcees Mike Riley and Bob Babbitt. I, incidentally, queued behind one of the original racers from the 1980's during dinner. There was a welcome entertainment, and I sat next to James Middleditch (who is a vegetarian, who clocked 9:32 this year!) for dinner. 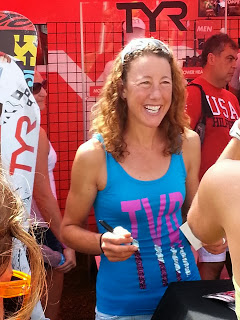 Chrissy Wellington enthusiastically signed autographs and took photos with fans: a class act!
11 October: Bike Check-In. I was dismayed to find my front tyre deflated. Suspecting a snake-bite on my tyre, I brought it to the local bike-store and sought the expertise of the resident bike-mechanic. Upon his thorough inspection, he assured me that he could not locate any discernible leak or gash. He proposed that I buy a canister of Pit-Stop, pump it into the tyre, spin it around, and inflate it further. I was, again, grateful to the bike mechanic who made my experience a positive one. I dodged another bullet, before it could graze me into submission. 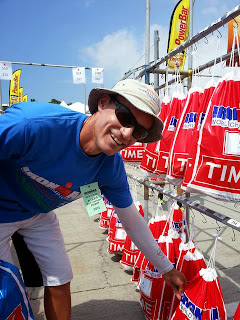 I checked in my bike, not before having photographed for documentation. The ENVE staff gave me a limited-edition Kona t-shirt and socks, for owning and using EDGE wheels (precursor to ENVE). A volunteer walked me through the Transition Area (for both 1 & 2), racked my bike, and escorted me to the Transition Tents and bag-claim area. It was a patient, purposeful, familiarization walk that gave me visual reference-points. 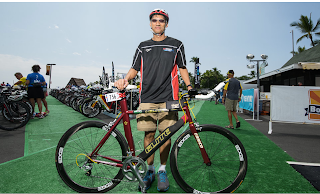 This photograph made it to the website: only Elite Bicycle racing.
It was an early night for me, with dinner at our favourite Chinese restaurant. I ate a hot meal of wanton-noodles. I had already laid out my Swim bag (with my Jabra two-piece racing attire, Aqua-sphere speed-suit, CO2 adaptor, CO2 cannisters) and necessary nutrition: CrampFix electrolytes and Hammer Nutrition Perpeteum.  It was fitful night of interrupted sleep as my dry cough persisted… 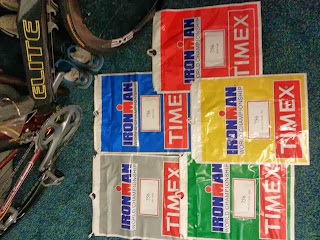