LEADING WITH A LEGACY: INTERVIEW WITH CLIFFORD LEE 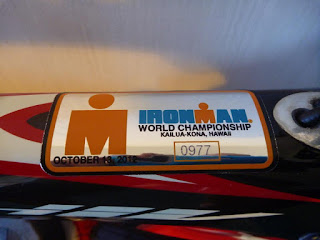 He has strong mental strength and high kinesthetic intelligence. These are core skills and abilities of the most competitive of athletes. Up till junior-college, he competed in pole-vault, track and field, bodybuilding and swimming. He was also the first gold-medalist for the Asian Junior Bodybuilding Championships. His ambition to be the best at what he focuses on, could have carved his future for endurance sports.

Clifford Lee is a public servant, by vocation. His infectious enthusiasm has influenced extensively many neophytes of the sport to, eventually, take up the personal challenge of an Ironman triathlon (his recreation and advocation). Having completed, at least, 15 Ironman races (in almost all continents), his feather-in-his-cap has to be completing the Ironman World Championships in Kona, Hawaii last year. Clifford was the first Singaporean to win a slot in the brand-new Ironman Legacy Lottery. He, subsequently, and successfully completed the prestigious event in good time (He danced cheekily and happily, Gangnam-Style at the end-point).

I first raced with Clifford on Jeju Island, Korea in 2006 in the Ironman distance. Despite having a cancelled swim (due to dangerously high waves), he completed the race in high spirits. His optimism, enthusiasm, and faith in others reflect his extraverted personality and subtle leadership. His journey with DNF (Did Not Finish) only fuelled his fire to complete more races in his future. 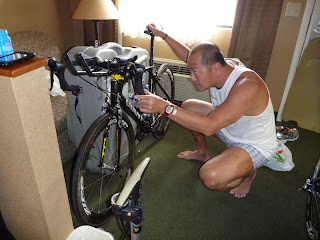 Clifford is very knowledgeable about bicycles, with a pronounced flair and aptitude for the mechanical and technical aspects. His overarching positivism and active participation, thus, makes him a suitable ambassador for the sport of long-distance triathlon. Enjoy the interview.

Enrico Varella (EV): Hey, mate. Overall, what was your Kona experience like?

Clifford Lee (CL): The overall experience is priceless. Back in the early 1980’s, I watched a little of it before on ‘ABC Wide World of Sports’. I was shocked at what these people could do. When I started the Ironman (IM) journey in 2006, I never imagined I would be at the Kona start-line, since it requires qualification from Age-Group (AG) races. The crowd around Kailua and bike U-Turn at Hawi was simply magnificent. You don't find such an electrifying atmosphere at other IMs. Trust me, during my stay I diligently shared my daily experience to all my friends (on Social Media) – something I have told WTC during my application for the Legacy Programme.

EV: How did you feel when you received results of your successful entry?

CL: My mind reversed to the early-1980s, when I first watched it on TV. I was overwhelmed with the outcome. I told my family immediately, and of course, I was so eager to post it on FaceBook. I had a very good feeling before the results was officially revealed. I think I must have written a good article during the application process. 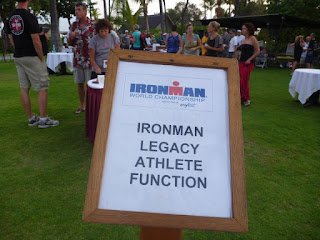 EV: You believed you could have initiated the idea of the Legacy Lottery to M-Dot. Tell us more about that.

CL: Back in August 2011, I wrote an email to the World Triathlon Corporation (WTC). I told them about my IM journey, and asked if they were able to offer me a slot in Kona, so that I could bring the experience back to all my friends. I had 12 IM finishes at that time. WTC replied, and thank me for my loyalty. As it was too close to the race, they were unable to offer me a slot. But they would keep me in mind in the future. I thought they were joking at first, but one month after Kona 2011, the Legacy Programme rolled out and 12 IM finishes was the requirement. Hmmm...I may have initiated this Programme...who knows? 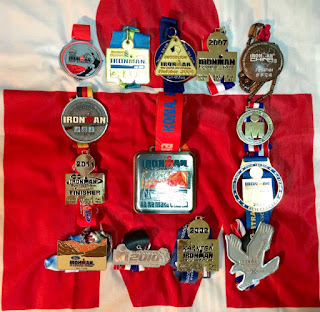 EV: What did you enjoy about the racecourse?

CL: I enjoyed the marathon, although running is not my favorite discipline. The support along Ali'i Drive was simply amazing! I could hardly walk. The cheering injected adrenaline into me and made me run quite a fair bit. I must say that all the aid-stations commanded a very high standard. The aid-stations were well spaced out, and each station was pretty long. You could hardly miss any nutrition during your bike and run legs. Volunteers were the one who made this happened. They have been well-briefed and executed their support in the their most outstanding fashion. Thanks to all the volunteers! 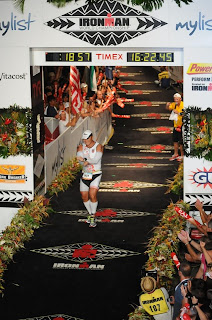 EV: What were the highlights of Kona?

CL: Apart from seeing all the professionals on a daily basis; pros you read about in Triathlete magazine, you get to see awesome athletes like the Physically-Challenged (PC) athletes competing there. Each has a story behind them. But the highlight for me was the Legacy Reception. About 100 of us gathered for a reception held on the beachfront of the Marriott Hotel. The hosts were the CEO of WTC and the race-director. Mike ‘Voice of Ironman’ Reilly was the event emcee. Several ironman legends such as Julie Moss, Katherine (1982 Ironman) and Paula Newbie-Fraser were there to congratulate us. The WTC-CEO continued to show recognition to the Legacy Athletes during the Pasta Party, too. There were Legacy Athletes with 20-40 IM finishes. The athlete from Mexico was the happiest as he had over-80 IM finishes, before he was chosen for Kona 2012. If you ask me, getting to know these awesome people was really the highlight of my entire stay there. 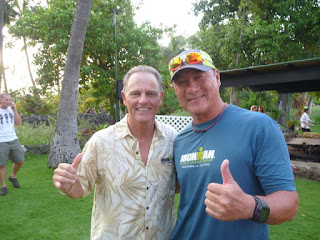 EV: How many more Ironmans would you do before you shift challenges? What are your future goals in endurance sports?

CL: I will probably clock another 10 IM, or so. Along the way, I may want to try races such as SWISSMAN – It's a beautiful race. I hope to do endurance races till I am 55. Big or small, long or short – that doesn't matter. Just keep a sport that ha ‘3-in-1’ sounds like a good deal. It's important to keep exercising! 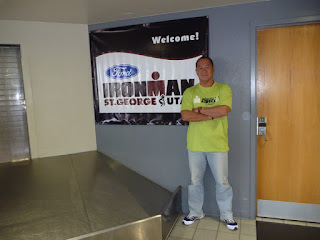 EV: Which was most memorable endurance sport race?

CL: Hahaha! You have asked me many times! Ironman St. George, Utah 2010. It was the inaugural race there. Swim was tough due to intense winds, bike was a super climb into the headwind, and run was part of the bike route. Really tough! My friends added at least three hours to their normal timings. This has got to be the toughest ironman in the world. Whenever I wear the Utah tee in other races, those who recognize it will always show me the thumbs-up. The race has been reduced to 70.3 due to high Did Not Finish (DNF) rates in the last three years.

EV: What do you enjoy most about Ironman?

CL: The process leading to the race day; and the rides with my friends. Training can be fun. That's where you meet old friends and make new friends. Ironman is not just a race; it's something that trains the individual from the planning to execution stages. Ironman triathlons test your determination and your fighting spirit. Even if you failed at races, that's not the end and nothing to be ashamed about. Come back stronger, and success will be even sweeter. Every athlete is a leader in his/her own class. The more you do, the more you learn. Share your experience so that people around you can shorten their learning curve. Love the sea, share the roads – these are just some of my community and environmental policies. End state: Endurance races build people! 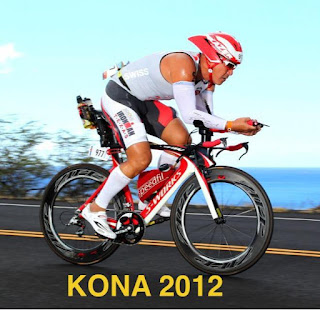 EV: You are a very good golfer. You even scored a hole-in-one. Tell us more about your golf passion.

CL: I golfed back in the 1990’s. I stopped for more than 10 years before I picked it up again in October 2011. I re-tested my handicap, and was given a handicap of 17. I set a personal target to reach single-handicap by December 2012. I attained it when I was playing off a handicap index of 9.8 in September 2012. Currently, I am playing with a 9.4 handicap. My first hole-in-one was achieved at the Sembawang Country Club on 5 June 2012. It was a Par-4, hole-in-1, at 270m. A usual hole-in-1 is usually achieve on Par-3s. It was an Albatross, Hole-in-1. I recall that I had a good drive with my driver that afternoon – long and straight – it landed and rolled into the cup. Golf is something that requires a lot of skills. It trains patience, requires a lot of mental strength, and accurate course-management. Many say triathlons and golf cannot mix. I think I have proven them wrong (laughs his infectious laughter). I may turn pro at age 50, as a senior professional. 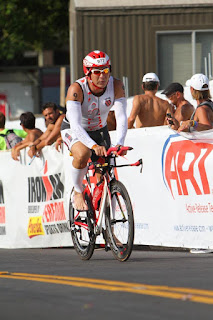 EV: Words of advice for newbies to Ironman distance?

CL: I have my own Ethos: P.A.S.S.I.O.N. Be…
Prepared for all races. Set correct footing from race-start.
Attentive to details. (Required for training and races).
Skillful in transitions. (There is always something to learn).
Self-Discipline. (Follow your own pace, race your own race).
Innovative in training. (Not just SBR. Gym, trail-running, etc).
Open to suggestion and feedbacks. (Listen to lessons learnt).
Non-complacent. No race is an easy race. (Race hard but smart).

Fact-find your IM locations. Check satellite pictures of the racecourses such as swim map, bike elevation and run elevation. Do mental preparation. I plot my own bike-elevation chart. This is my usual approach to a race. Mental rehearsal is something you can do many times over. This is to eliminate culture shocks, and it helps you to acclimatize even faster. From all these research, plan your training accordingly. Oh yes...time-zone acclimatization starts when you enter your airplane!
Posted by Enrico Varella at 2:52 PM

Great Interview!
Clifford - truly a LEGEND and inspiration to many!

He is my inspiration!

Congratulations Enrico Varella! Thank you so much for taking the time to share this exciting information.

You've got a design here thats not too flashy, but makes a statement as big as what you're saying.I am really impressed with this blog.It is easy to see that you are impassioned about your writing.Triathlon