The Importance of Announcements 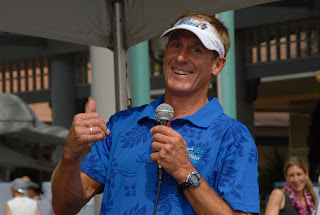 When someone announces something, it usually means that the news to be shared would be important. Announcements can be joyous occasions, as when my Facebook friends proclaim their love for each other, and that they will be married or engaged. Companies announce both good and bad news because staff need to know; ignorance is not bliss. Social media tools are great for announcing a grand opening and celebrations; giving feedback and testimonials.

Today was the Aviva Ironman Singapore 70.3, the fourth local installment in the half-Ironman series. About 600 participants were Singaporeans, and the other 800 were internationals. As I listened to the Ironman emcee and announcer call each finisher into the chute, I realized that Whit Raymond [see our in-depth interview with him in our archives] emphasised both their name and country. As I watched each participant come through into the final minutes of the 8 hour 30 minute cutoff time, I could not help but cheer each determined and persistent participant in. One member of Triathlon Family, Chris Dyson was pacing himself alongside dozens of fatigued or neophyte racers to encourage them on. He must have done quite a few kilometers in total!

Whit’s role as announcer is an important one. His job is not only about making announcements, but also keeping the level of energy high for the supporters. Today, I played that supporter – an unfamiliar place for me as I was to racing this series. Instead, with a motley crew of triathletes and families, we served water to the weary and thirsty participants during their run leg. It was my first time as volunteer water-boy, however it was a great experience when your receivers appreciate your efforts. We announced to each other as runners approached us, informed them it was only a water station, and encouraged them on. One thing I learnt as a participant, when you addressed the thirsty runner by his/her name they beam up. Fellow blogger, Clifford Lee masterminded the water-station idea, and it worked beautifully today for all participating and involved. Matthew Wong gives his perspective which included insights that volunteers can consider.

Congratulations to all finishers, especially to the members of Triathlon Family Singapore! Dex Tai and Charles Teng finished in identical times of 5:20; it is a personal best for Charles. I am pleased for both of you.

[Note to self: Race next year – it is less stressful.]

Posted by Enrico Varella at 5:30 PM