Based in Kuala Lumpur, Malaysia now as the CEO of an insurance division Tobias Frenz is no stranger to us. We featured him a few years ago, where we highlighted his prowess in the endurance field. His company won an industry award recently, which describes his commitment to excellence, mastery and strength of purpose. 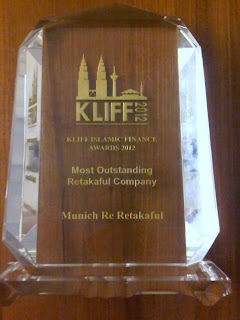 His company won the "Most Outstanding Retakaful Company 2012" Award recently (a second after their first, in 2010).

Tobias has achieved the dream of many an amateur endurance athletes. He has made the move from cycling to long-distance triathlons, and now to long-distance, open-water swimming. We sprinted to him to capture this interview, of which describes his new passion.

Enrico Varella: Thank you for making time, once again, for an interview. Tell us more about your challenge to swim in the English Channel…

Tobias Frenz: English Channel – yes, I'm been confirmed a slot in the week of 22 July 2015. But I'll do as part of the Arch to Arc race (www.enduroman.com). [Tobias will run from London to Dover, swim the Channel to Calais, and then cycle to Paris. He had, initially, planned for 2014 but decided to do the Race Across America instead with a team of four friends.]

‘So, today I finally got my tide for my first (and, hopefully, only) English Channel swim attempt confirmed. I'll be on the neap tide 22-29 July 2015. It is actually part of an event called Arch to Arc. I'll start on 20/7/2015 in London, run south to Dover for 140km, then dive into the Atlantic Ocean to cross the English Channel and, when making landfall in France, will hop on my bike to complete a 290km ride to Paris. Finally popping champagne at the Arc de Triomphe. The run and ride is only appetizer and desert, it is all about the swim really.’ [Yes, every EC aspirant has to do a 6-hour qualification swim in 16°C cold water. I wouldn't be able to stand such cold waters right now and need to put on a bit of weight for insulation...]

You might wonder why 2015 only. This is because there are no earlier slots available for A2A. Secondly, the 3,000-mile Race Across America (RAAM) team relay is on in 2014.

EV: How did you begin your journey on Open-Water Swimming (OWS)? Were you a swimmer in school?

TF: I have a cycling background, and only got into swimming in my early-30’s, when I started training for Ironman races. The first peek into OWS was a 15km swim called Clean Half along Hong Kong's scenic, southwest coast in 2010. I truly enjoyed being out in the open sea and thought that this was a sport I'd like to pursue further, as I had become somewhat tired of Ironman and marathon racing. But it took me a good year to actually put that thought into further action. Kuala Lumpur (Malaysia) is not a good platform for swimming, with no proper public swimming pools and the next beach an hour's drive away. 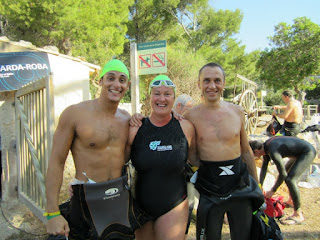 I applied for a slot at a 26km swim through Lake Zurich (in Switzerland) that is often used as a qualifying swim for English-Channel aspirants. I was fortunate to get accepted for the 2012 swim. With this goal in mind, I decided to finally take swimming a bit more seriously and joined a swimming group.

EV: Who was your major influence into the world of OWS?

TF: I cannot put a particular name as my interest grew over time. You surf OWS websites and get, more and more, into it. One book fuelled my interest though. ‘The Great Swim’ features the quest of four young American women trying to become the first woman to cross the English Channel in 1926. American Gertrud Ederly (aged 19) succeeded in a time of 14:39h, which was 2 hours faster than the existing men's record of 16:33h. Only 5 men had crossed the EC before, with Englishman Matthe Webb being the first in 1875 in 21:45h. For a comparison - today's record stands at 6:58h for men and 7:25h for women. I found it very inspiring what women achieved during the early days.

EV: Did you make the transition from long-distance triathlon, or are you a purist and specialist in swimming?

TF: I transitioned from triathlon. What was my strength – lean body, strong leg power with a high power-to-weight ratio and coping well under hot conditions – turns out now to be more of a weakness, as far as open water swimming, is concerned. Leg muscles are of little use for swimming and the upper body still needs years to build up the muscles a swimming specialist has developed from his early years on. Lastly, I do struggle in cold water as I'm lacking body fat, and it does not help that I'm living in a tropical climate. So, I'm still at the bottom of the OWS food chain and this makes the journey so interesting and motivating for me...trying new things you are not yet that good at.

EV: Which was your first OWS race? Describe that briefly.

TF: My first marathon swim was a 10km charity swim in 2010 along Singapore's East Coast.  But, as I mentioned earlier, it was a 15km swim in Hong Kong coast that really triggered my OWS interest. I liked being exposed to the elements and the casual and relaxed event atmosphere. And all I needed to carry was a Speedo, a swimming-cap, and goggles instead of a bulky 30kg bike-box for Ironman races.

EV: Which was your most challenging race, and how so?
TF: The most challenging and my first swim DNF was the recent 26km Lake Zurich swim on 5 August 2012. I felt I had a perfect build up to this race as I had participated in various open water swims in the two months before (20km, Australia; 10K & 25K in Spain; and 43K in the USA). So, I had no doubt that I could go the distance. Well, I had to eat humble pie, as I simply couldn't take the ‘cold’ water (~20 degrees Celcius). Cold is a subjective feeling though as some fellow English Channel aspirants felt it was actually ‘warm’. To put this into perspective, the water temperature in the English Channel during the swimming season mid year is only about 15-16°C. Darren Miller will attempt to swim the North Channel between Ireland and Scotland in 2013 where temperatures are only between 10-14°C. This underlines the fact that distance says little about how challenging a swim can be.

In Zurich, I simply wasn't acclimatized to such temperatures and the moment I stepped into the lake I got the chills. But I wasn't thinking too much about it, initially, as I was hopeful that the sun would come out in two hours’ time and that swimming would make me warmer.  However, neither did the sun come out nor did I warm up. Quite the opposite, I got colder and was breathing too fast to compensate for the cold; so I called it quits after 10K or 3hours later. As much as a DNF is always a disappointment, I felt okay with it as I acknowledged that I wasn't prepared for it, and my mind wasn't fully committed to it. It is a lesson learnt and motivation to get it right next time.

EV: What is your advice for beginners to long-distance, open-water swimming?

TF: Don't be afraid of the sea or long distances, it is easier than you might think. Unless you want to break speed records you can cruise for hours at a modest speed. The challenge is more mental than physical as there is little distraction in the open waters.  Athletes used to long-distance, endurance sports should, thus, have full confidence that they can cope with an OWS challenge of 10K or more.
(Tomorrow: Part 2)
Posted by Enrico Varella at 12:31 AM